'The mandates are not meant to control your life, they're meant to save it,' Biden said

On Tuesday, President Biden addressed the nation amidst concerns of the recent surge in COVID due to the newly identified Omicron variant, the leading variant in the U.S. and many other nations worldwide.

“I want to acknowledge how tired and frustrated you are over this pandemic,” said Biden as he opened the address to the nation.

The President answered key questions he said the American people had been asking.

Biden said that those who are unvaccinated have a greater risk of severe illness and hospitalization. He noted that the vaccinated, especially those with a booster, would fare well in the face of the virus.

The President still issued a call for all Americans to wear a mask when present with other people.

He said only 40 million Americans remain unvaccinated and reiterated that the vaccine “saves lives. … I believe it is your patriotic duty.” He asked anyone who received their last vaccination over six months ago to get a booster.

The President also highlighted the need to have children ages 5-11 vaccinated.

Biden told parents with children under the age of 5, who are unable to be vaccinated, should be fully vaccinated to protect them from a COVID infection.

The President said that getting a vaccine is “a choice of life or death,” warning against the misinformation being distributed on cable television and social media, calling on the “purveyors” to stop. He called the information from such sources “wrong and immoral.”

Biden also addressed the vaccine mandates, saying, “the mandates are not meant to control your life, they’re meant to save it.”

The President said under his administration, 200 million Americans had been successfully vaccinated, pointing to a stark contrast to March of 2020.

The President shared that his administration would be deploying vaccinators across the country to open many new locations to increase access to vaccines.

The President said the federal government would be providing free at-home testing for all Americans. This access would be available following the holidays. Biden said the administration would “purchase a half-billion tests” and set up websites to have them shipped to your home with a “simple Google search.”

Biden also said he was activating FEMA resources to help hospitals handle a surge in patients and management. Additionally, he said the administration would deploy an additional 1,000 personnel to supply more doctors, nurses and staff to help support hospitals. FEMA’s resources, paid for by the federal government, would provide additional hospital beds, ambulances and billions of units of PPE for use in hospitals.

The President concluded that he would not be imposing a shutdown of businesses or schools due to the Omicron surge.

“We know how to keep our kids safe from COVID. K through 12 should remain open. And today, schools are safer than ever. This week the CDC issued a test-to-stay protocol to ensure kids can remain in school,” said Biden.

“As we head into the holidays, I want us to all keep the faith. I want to thank you for your love and sacrifice these last two years as we faced this struggle in our nation. Remember, there is no challenge too big for America. We will come through this stronger and better if we stand together,” said Biden as he closed the speech.

The President took time to field questions from reporters following the speech.

When asked about the travel ban, the President said, “I am considering reversing the travel ban. It is something I am going to be discussing with my team.”

Members of the press also asked about the Build Back Better deal and its failure to reach approval.

Biden highlighted his hope of putting more money in the pockets of families to help with childcare costs and medical costs.

“Senator Manchin and I will get something done,” he said.

The address comes after a statement released by the White House earlier this week predicting a winter of “severe illness and death” for those not vaccinated and a better outcome to those who are vaccinated.

Late Monday, the President took to Twitter to outline a preview of Tuesday’s address to the nation. He outlined the proposed plan to distribute 500 million COVID tests to Americans, provide more resources from FEMA for hospitals, and to deploy national guard members to aid in testing and vaccination sites.

According to statistics from the CDC, Omicron spreads easier and faster than the previous Delta variant that caused the surge of cases in late Summer. It is now responsible for more than 73% of active cases nationwide. 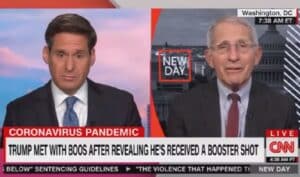