The controversy began after Watters told a crowd at last weekend’s Turning Point USA summit to “ambush” Fauci with questions, Project Veritas style if they see him in public.

“Now you’re going for the kill shot. The kill shot with an ambush is deadly because he doesn’t see it coming,” Watters said. After suggesting a point people could make about gain-of-function research, he added, “Boom, he is dead! He is dead!”

Fauci is so soft & arrogant that he wants Watters FIRED for saying people should ask Fauci about lying under oath RE Gain of Function Research. Sounds like an attack on the free press!pic.twitter.com/SIaxYuj2LR

Fauci was asked about Watters’ comments during a CNN appearance on Tuesday.

“That’s awful that he said that,” Fauci told CNN. “And he’s going to go very likely unaccountable. I mean, whatever network he’s on is not going to do anything for him. I mean, that’s crazy. The guy should be fired on the spot!”

Dr. Anthony Fauci says Fox News’ Jesse Watters should “be fired on the spot” for telling a crowd to “ambush” Fauci with “the kill shot.”

But, he adds: “He’s gonna go, very likely, unaccountable. I mean, whatever network he’s on is not going to do anything for him.” pic.twitter.com/K3X0V3jZdM

Fox News said they had reviewed the full context of Watters’ statement and that it was “more than clear” he was speaking metaphorically and not calling for violence against the National Institute of Allergy and Infectious Diseases head.

“Based on watching the full clip and reading the entire transcript, it’s more than clear that Jesse Watters was using a metaphor for asking hard-hitting questions to Dr. Fauci about gain-of-function research and his words have been twisted completely out of context,” Fox News said in its statement. 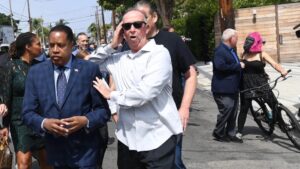 Why Do White Liberals Feel Entitled to Disrespect Black Conservatives?