Republican legislators broadly took issue with the president’s plan to cancel student debt, highlighting issues that are left unaddressed by the proposal such as inflation, and questioned the president’s authority to use taxpayer money without the consent of Congress.

A number of Republican legislators, particularly in the House of Representatives which traditionally holds the final say in matters of appropriations, took issue with the unilateral decision to spend taxpayer money. “The president cannot just spend $300 billion without permission from Congress,” Don Bacon said.

“Despite soaring inflation, President Biden is bypassing Congress and single-handedly acting to take the tax dollars of hardworking Pennsylvania families – many of whom either did not go to college or sacrificed for years to fully repay their student loans – and use that money to fulfill a campaign promise to the political left. This stroke of a pen will cost taxpayers over $300 billion in the next 10 years,” said Pennsylvania Representative John Joyce.

Senator John Barrasso, who cosponsored a bill that would prohibit the Department of Education from spending funds on debt cancellation without the express permission of Congress, also spoke out against the plan:

“Cancelling millions of dollars in student loan debt will make the pain of high prices even worse for Wyoming families. Today’s announcement is an insult to every American who played by the rules and worked hard to responsibly pay off their own debt. This decision is also a boon for Biden’s wealthy supporters. Once again, the Biden administration is selling out working families to appease the far-left wing of the Democrat party.”

Speaking to Fox News, Representative Kevin Brady suggested it was unfair to expect taxpayers who did not attend college to foot the bill for wealthier Americans who did.

Senator Richard Burr, who submitted legislation earlier this year to prevent any student debt from being canceled, questioned the legality of the scheme and suggested that President Biden was knowingly violating the law while only treating the symptoms of more complicated issues:

“This move will not solve sky high college tuitions. This will pour fuel on the fire, increasing college prices and accelerating inflation. It will encourage more schools to increase costs and encourage more students to take out loans they cannot pay back in the hopes they’ll never have to do so. The President knows he does not have the legal authority to unilaterally cancel student loan debt, but is ignoring the law and bipartisan opposition in Congress. I urge the Senate to pass the Student Loan Accountability Act, which would make Congress’ intent clear and prevent future sweeping, unilateral loan cancelation from this Administration.”

Senator Kevin Kramer, who opposed the nomination of Education Secretary Miguel Cardona for his support of debt cancellation, said that the president accidentally managed to concoct a plan that will increase inflation:

“Just when you think Joe Biden can’t possibly make inflation worse than he already has, he pulls this stunt. Not only will this ‘free money’ further fan the flames of Biden’s inflation, it is fundamentally unfair to the millions of Americans who don’t have student debt to pay off. Transferring student loan debt to people who paid theirs off or never accumulated any in the first place is theft, and taxpaying voters will be justifiably outraged.”

Representative Ken Calvert noted that the student debt forgiveness plan would not help Americans in the long run by dealing with the high cost of tuition. According to projections referenced by Calvert, despite taxpayers funding the projected $300 billion, outstanding student loan debt is “projected to return to its current level of $1.6 trillion in just four years.”

Democrats in the House and Senate do not share the concerns of their conservative counterparts.

House Speaker Nancy Pelosi, in a statement following Biden’s announcement, applauded the decision. “By delivering historic targeted student debt relief to millions of borrowers, more working families will be able to meet their kitchen table needs as they continue to recover from the challenges of the pandemic,” she said.

Similarly, in a joint statement, Senate Majority Leader Chuck Schumer and Senator Elizabeth Warren were content to hear that the president had taken the action unilaterally. “With the flick of a pen, President Biden has taken a giant step forward in addressing the student debt crisis by cancelling significant amounts of student debt for millions of borrowers,” they said.

President Biden, for his part, was asked by a reporter Wednesday if he thought the decision to cancel debt was unfair to those who paid off their loans or chose to forgo them entirely. The president sidestepped the question by asking if it was fair for owners of “multi-billion-dollar businesses” to be “getting all the tax breaks.” 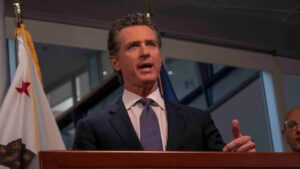