Noem, who was endorsed by President Donald Trump in February, handily won re-election.

Noem’s intense opposition to restrictions imposed on Americans during the COVID-19  Pandemic and to the Biden administration’s lack of action regarding the border crisis earned her national recognition and fandom across the country.

But she was denounced by many for signing legislation that banned biological males from participating in girls’ sports.

Stitt will serve a second term as the governor of Oklahoma.

“Folks, the past year we ran on the record of limited government, lower taxes and traditional family values,” Stitt said to his supporters at a watch party in Oklahoma City, per Tulsa World. “On this campaign, we talk a lot about the Oklahoma turnaround from budget deficits to record surpluses.”

The governor, who personally spent $2 million on his campaign, focused on accomplishments from his first term in office. This includes a low unemployment rate, an increase in pay for teachers, cuts in taxes, and increased economic development.

Reynolds was described as a “fundraising powerhouse” whose consistent lead in the polls set the expectation that she would defeat Democratic Secretary of State Deidre DeJear.

“Our message for you tonight is this: We are not stopping. We are not slowing down,” the governor told her supporters at the Downtown Des Moines Hilton ballroom on Nov. 8, per the Des Moines Register. “I am so excited to get back to work and to lay out a bold, conservative agenda and to follow through with what we say we’re going to do.”

Reynolds announced her intent to seek reelection after delivering a televised response to President Joe Biden’s State of the Union Address in March.

“Americans are tired of a political class trying to remake this country into a place where an elite few tell everyone else what they can and cannot say — what they can and cannot believe,” she said, denouncing officials who oppose parents’ involvement in their children’s education, the government’s COVID-19 restrictions, and rising inflation and unemployment.

Prior to Election Day, Republicans held 28 governorships across the country. 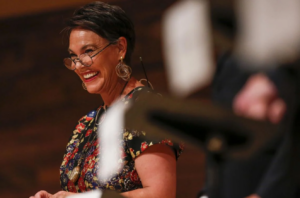