'I Know Our President Has Told Us The Pandemic Is Over ... I Still Just Don’t Want To Get COVID'

“I really had an exhausting weekend, emotionally, physically,” Stern reported on Monday during his radio show. “For the first time in two years I ventured out of the house.”

Germaphobe and Covid-concerned @HowardStern leaves 'apocalypse bunker' to dine with pals for first time since 2020 https://t.co/D9m6RlWMY2 via @pagesix

“Howard was there without even a mask,” one diner told the outlet. “They all sat at a large table, Howard was seated next to Jimmy and also at one point seemed to be in deep conversation with Jon Hamm. Stern told restaurant staff this was his first night out since the start of the pandemic.”

“For me, [COVID] is still going on and I haven’t left my house. I can’t figure out how to integrate myself,” Stern said during a November 2021 episode of his show. “I’ve been locked up so long and I haven’t gotten COVID. I’m afraid I’ll be the one a–hole who gets COVID and I’ll die. Even though people don’t seem to be dying that much [anymore].”

Besides the occasional walk, Stern and his wife, Beth Ostrosky, who are both vaccinated, have remained in his “bunker” estate in Southampton since the COVID-19 pandemic began. Stern has hosted his radio program from a home studio — referring to the shows as “apocalypse broadcasts.”

In January, Stern reportedly said unvaccinated people should be turned away from hospitals, Timcast reported.

“If it was up to me, anyone unvaccinated would not be admitted to a hospital,” Stern responded to a caller regarding the pandemic affecting the unvaccinated. Stern went on to criticize people questioning the government’s push for vaccination saying, “I’ve taken this vaccine three times and the worst side effect is for a day, I had a little bit of a headache.”

No one’s sitting there conspiring against you. Americans don’t want to create a vaccine that’s going to turn you into a robot, or magnetize you. There’s enough Americans now have taken it. Look at us as a sampling where nothing has happened to us. It’s time for you to get it. … Now if you don’t get it, in my America, all hospitals would be closed to you. You’re going to go home and die. 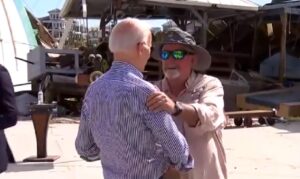