President Joe Biden was caught on a hot mic on Wednesday telling the Fort Myers Beach mayor that “no one f-cks with a Biden.”

Biden had traveled to Florida to survey the damage caused by Hurricane Ian.

The president was speaking to Fort Myers Beach Mayor Ray Murphy when he made the remark.

POTUS: “No one fucks with a Biden”pic.twitter.com/6aGqrZfA0q

Both men had a good laugh after the comment, before shaking hands and going their separate ways.

This is not Biden’s first time being caught swearing on a hot mic.

Biden was caught on a hot mic in January calling Fox News reporter Peter Doocy “a stupid son of a bitch.”

Biden also infamously was caught on a hot mic telling then-President Barack Obama in 2010 that signing the Affordable Healthcare Act was a “big f-cking deal.”

Today, 11 years ago, the Affordable Care Act was signed into law by President Barack Obama.

Today, 11 years ago, Vice President Joe Biden called it a “big fucking deal” a little too close to the mic.

In a 2021 article for Politico titled, “Joe’s Potty Mouth,” reporter Alex Thompson wrote that “behind closed doors, the former Catholic school boy is quite profane, according to several current and former aides.”

“In meetings with aides, Biden’s vulgarities include but are not limited too: ‘F-ck them,’ ‘What the f-ck are we doing?’ ‘Why the f-ck isn’t this happening?’ ‘bullsh-t,’ ‘dammit,’ or just simply: ‘f-ck,’ according to several current and former aides,” the report says. “When pushing aides for better answers, he will sometimes say, ‘don’t bullsh-t a bullsh-tter.'”

Though Biden appears to swear quite a bit, sources told Politico that he does not like to do so in front of women or children. If one slips, it is generally followed by an immediate apology.

“When he cusses around women, it is always, and I mean always, followed by an immediate apology,” one source told the outlet.

“He’s from a different generation but if there’s people that are younger than him, especially women, he feels like, ‘Hey, how would I feel if I was cussing around my daughter or my granddaughter?’” said another former aide. “You don’t cuss in front of women and children.” 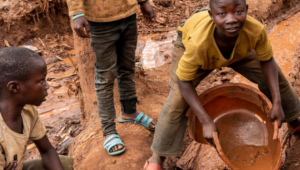