Proud Boys leader Enrique Tarrio pleaded not guilty to felony charges brought against him as part of investigations into the events of Jan. 6, 2021.

Tarrio is the leader of the Proud Boys, a men’s organization labeled “a right-wing extremist group with a violent agenda” by the ADL. He was indicted in March on charges including conspiracy to obstruct an official proceeding and was arrested in Miami. He was ordered to remain in the government’s custody while he awaits trial.

Additional charges include two counts each of assaulting, resisting or impeding certain officers, one count of obstruction of an official proceeding, and one count of destruction of government property.

Prosecutors claim the 38-year-old and his supporters formed a group called the “Ministry of Self Defense” and plotted to prevent Congress from certifying the result of the 2020 Presidential election.

“This group was to form the nucleus of leadership in a new chapter of the Proud Boys organization, which Tarrio described as a ‘national rally planning’ chapter,” wrote prosecutors in the indictment. “The first event targeted by the group was the rally in D.C. on January 6.”

Tarrio was not present at the Capitol during the Jan. 6 security breach.

At a U.S. District Court hearing in Washington on April 5, Tarrio entered his plea while appearing virtually.

Assistant U.S. Attorney Luke Jones said at the hearing the federal government had to work with specialists from Quantico to access Tarrio’s seized cell phone.

“The government was not able to get into the phone; law enforcement that is,” Jones said

“How believable is this?” asked an attorney representing one of Tarrio’s co-defendants.

USA Today reported that Tarrio has previously cooperated with federal authorities at the expense of some of his relationships with fellow Proud Boys and which led to a division within the organization.

Five co-defendants affiliated with the Proud Boys have also been charged in connection with the government’s investigation.

“One member of the group, Matthew Greene, pleaded guilty in December to one count of conspiracy and one count of obstructing an official proceeding and agreed to cooperate with prosecutors,” reports The Hill.

During the hearing, attorneys representing the men asked Judge Timothy Kelly to delay the trial because of the delay in Tarrio’s arrest and requested their client be let out of federal custody prior to the trial, per Business Insider.

Judge Kelly declined to free the defendants but did opt to delay the trial.

The trial is currently scheduled for May 18. If convicted, Tarrio could be sentenced to serve up to 20 years. All parties will return to court on April 21. 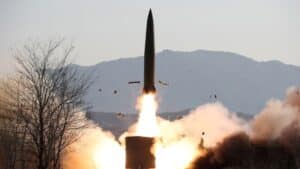