North Korea confirmed Tuesday it will use nuclear weapons against South Korea if the nation is attacked.

The warning was issued through the state’s propaganda agency KCNA.

“If South Korea, for any reason — whether or not it is blinded by misjudgment — opts for such military action as ‘preemptive strike’ touted by South Korea, the situation will change,” said Kim Yo Jong, the powerful sister of Communist leader Kim Jong Un. “In that case, South Korea itself will become a target.”

“If the South Korean military violates North Korea territory, it will face an unimaginably terrible disaster and the North’s nuclear combat force will have to inevitably carry out its duty,” she added.

Both North and South Korea have been in an official state-of-war since the Korean conflict began in June 1950.

“Both Koreas have increased displays of military strength after North Korea test-fired a range of increasingly powerful missiles this year. Officials in Seoul and Washington also fear it may be preparing to resume testing nuclear weapons for the first time since 2017 amid stalled negotiations,” reports Reuters. 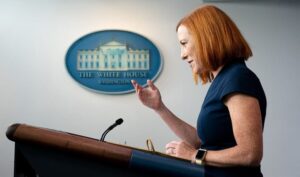