Critics have objected to the law’s ban on school personnel or third parties instructing or discussing sexual orientation or gender identity with children in third grade or younger. Opponents dubbed the law the “Don’t Say Gay” bill online.

During an April 4 briefing, a reporter asked what the Biden administration believed should be taught to students regarding sexual orientation and gender identity. Psaki responded by accusing Florida officials of using the bill as political theater.

“This law … is politicians in Florida propagating misinformed, hateful policies that do absolutely nothing to address the real issues,” Psaki said.

DOOCY: "At what age does the White House think that students should be taught about sexual orientation and gender identity?"

PSAKI: "This law…is politicians in Florida propagating misinformed, hateful policies that do absolutely nothing to address the real issues." pic.twitter.com/bgdKLafk1M

Psaki said the Department of Education is evaluating what actions to take next and working to determine if the law violates federal civil rights legislation.

“I think this is a politically charged, harsh law that is putting parents and LGBTQ+ kids in a very difficult, heartbreaking circumstance,” the Press Secretary added.

“Parents’ rights have been increasingly under assault around the nation, but in Florida we stand up for the rights of parents and the fundamental role they play in the education of their children,” the governor said on March 28. “Parents have every right to be informed about services offered to their child at school, and should be protected from schools using classroom instruction to sexualize their kids as young as 5 years old.”

President Joe Biden publicly opposed the bill in early February, calling the policy “hateful” and pledging to “fight for the protection and safety” of children who identify as LGBTQI+.

Officials from the Biden administration met virtually with Florida students and their families on March 17 as part of a “listening and learning roundtable” regarding the bill. The event was led by Education Secretary Miguel Cardona and Department of Health and Human Services Assistant Secretary Rachel Levine.

“Laws around the country, including in Florida, have targeted and sought to bully some of our most vulnerable students and families, and create division in our schools,” said Cardona in a statement released after the virtual meeting. “My message to you is that this administration won’t stand for bullying or discrimination of any kind, and we will use our authorities to protect, support, and provide opportunities for LGBTQI+ students and all students.”

Florida’s Parental Bill of Rights will be effective at the start of the 2022-2023 school year. 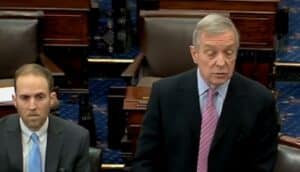