The protest was announced by the activist group Ruth Sent Us, who recently made headlines for doxing the home addresses of conservative Supreme Court justices and staging protests at their homes — but was a collaboration of several pro-abortion groups.

We have had careless and cowardly representation by @SpeakerPelosi. The GOP followed a scorched earth strategy with endless Benghazi hearings and ACA repeals, but she passed endless bills that lay on @LeaderMcConnell‘s desk and refused to hold hearings on TRUMPIAN crimes. 2/x

In a Twitter thread about the protest, Ruth Sent Us blasted Pelosi for “careless and cowardly representation” for not doing more to keep Justice Brett Kavanaugh off the bench.

“We have had careless and cowardly representation by [Pelosi],” the group said in a thread. “The GOP followed a scorched earth strategy with endless Benghazi hearings and ACA repeals, but she passed endless bills that lay on [Senate Minority Leader Mitch McConnell’s] desk and refused to hold hearings on TRUMPIAN crimes.”

Through Herculean efforts of grassroots volunteers, @SpeakerPelosi was reinstated in 2019. She held ZERO hearings into Kavanaugh’s crimes and perjury. Imagine if she had. Would this creep be on the Court, daring to overturn Roe? 4/x pic.twitter.com/kmIBva29HZ

“Through Herculean efforts of grassroots volunteers, [Pelosi] was reinstated in 2019,” the thread continued. “She held ZERO hearings into Kavanaugh’s crimes and perjury. Imagine if she had. Would this creep be on the Court, daring to overturn Roe?”

Despite several groups working together to organize the protest, only about seven people showed up.

“We’re here because Nancy Pelosi and the whole leadership of the Democratic party has been complicit, complicit with the fascist Republican party that warns to not only only eliminate abortion rights, but gay marriage, trans rights, and a whole slew, a whole slew of rights!” a female protester shouted into a bullhorn in video posted to Twitter.

As Timcast previously reported, pro-abortion protesters marched into the neighborhood of Justice Samuel Alito on Monday evening in protest of the leaked opinion he authored to overturn Roe v. Wade. Activists also protested outside the homes of Chief Justice John Roberts and Justice Brett Kavanaugh on Saturday evening.

Pelosi had praised the protesters showing up to the homes of Supreme Court justices, despite the fact that the demonstrations appeared to be in violation of 18 U.S.C. § 1507, which prohibits “pickets or parades in or near a building housing a court of the United States, or in or near a building or residence occupied or used by such judge, juror, witness, or court officer” are prohibited when done with the intent “of interfering with, obstructing, or impeding the administration of justice.”

The House Speaker had said that the protesters “channeled their righteous anger into meaningful action,” according to a report from the New York Post.

The protests are in response to a draft opinion showing that the Supreme Court voted to overturn Roe v. Wade, which was leaked to Politico last week.

Until the opinion is signed, justices can still change their minds and keep Roe in place. If it is overturned, abortion law will be returned to the states to decide.

A majority of 75.8 percent of voters believe that the pro-abortion protests at the homes of Supreme Court justices is “unacceptable,” including a 66.6 percent majority of Democrats, 86.5 percent of Republicans, and 75.1 percent of independents.

Pelosi has not yet commented on the protest at her own home.

Timcast has reached out to Pelosi’s office for comment and will update this story if one is provided. 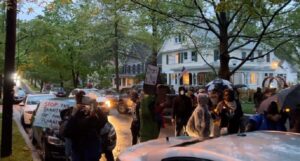