'They are often misogynist, often racist as well,' Trudeau said on Canadian television

Speaking in French on the Quebec broadcast, the prime minister defended the necessity of COVID-19 Vaccines and noted some Candians’ resistances.

“We will continue to convince them … but there are some people that are fiercely against vaccination,” Trudeau said.

“They are extremists,” said the interviewer.

“They do not believe in science,” he replied. “They are often misogynist, often racist as well.”

Trudeau continued, “A small group that occupies a loud space and … a decision needs to be made as a leader, as a county. Do we tolerate these people?”

Trudeau added that 80% of Quebecers “did what they had to do and got vaccinated” and that they would not “block us” from returning to normal life.

Trudeau has frequently criticized citizens who have not gotten the COVID-19 vaccine.

In August, he warned federal workers who did not get vaccinated would face “consequences” but did not specify further.

“The bottom line is, if anyone who doesn’t have a legitimate medical reason for not getting fully vaccinated or chooses to not get vaccinated, there will be consequences,” Trudeau said in a statement, per CP24.

While campaigning for reelection the same week, he yelled “Please get vaccinated!” through a megaphone at mask-mandate protestors.

A video of Trudeau referring to people who refused to get the COVID-19 vaccine as “those people”  who “put us all at risk” while at a Sept. 1 campaign event was widely criticized.

“The folks out there shouting — the anti-vaxxers — they’re wrong,” the Liberal party leader said. “They are putting at risk their own kids, and they’re putting our kids at risk as well.”

Maxime Bernier, the leader of the People’s Party of Canada, called Trudeau a “fascist psychopath” on Twitter.

“Stop talking about ‘those people’ as subhuman that must be excluded from society, you fascist psychopath,” Bernier tweeted.

Bernier added the next day: “If Liberals really wanted to combat hate speech the first thing they should do is get rid of their leader.”

Less than a week later, Trudeau said at a press conference the protestors at his campaign events were “anti-vaxxer mobs.”

“Yes, there is a small, fringe element in this country that is angry, that doesn’t believe in science, that is lashing out with racist, misogynistic attacks, but Canadians, the vast majority of Canadians, are not represented by them,” he said. 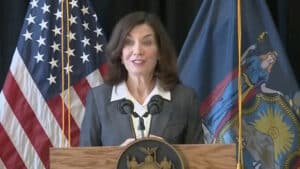