'This Whole Situation It Feels Like The Movie Mean Girls'

TikTok influencer Dylan Mulvaney, who identifies as a transgender woman, responded to Caitlyn Jenner’s criticism referring to it as “pretty evil” in a Sunday video.

Jenner criticized Mulvaney in response to Republican Tennessee Senator Marsha Blackburn’s post sharing the influencer’s video. The video in question features the influencer discussing the visual presence of his male groin, which he refers to as his “bulge,” while wearing clothes designed for biological females. Mulvaney proceeds to sing about “normalizing the bulge.”

“Thank you [Marsha Blackburn] for speaking out and having a backbone — one of the best senators we have. Let’s not ‘normalize’ any of what this person is doing. This is absurdity!” Jenner said in response to Blackburn.

Jenner, who was previously known as Bruce and has identified as a transgender woman since 2015, followed up his criticism of Mulvaney tweeting shortly after “he is talking about his penis!”

Mulvaney announced his Sunday video was explicitly in response to Jenner saying, “we are two of the most privileged trans women in America at the moment.” The TikTok influencer claimed the two bore “responsibility” towards the transgender community despite their “very different” views.

“A few days ago I probably would have still been willing to sit down with you and try to connect with you in some way because I automatically have a lot of respect for you as a fellow trans woman,” Mulvaney continued. “But then you decided to ridicule me very publicly.”

Day 233- a message to Caitlyn. To my followers, please do not send her any hate. ❤️ #trans #daysofgirlhood #caitlynjenner

Mulvaney shared screenshots of Jenner’s tweets in the video and claimed not to be “phased” by the initial response to Blackburn but was upset the former Olympian had pointed out his male genitalia.

“Not you calling me a he!” Mulvaney said with an exaggerated gasp referencing Jenner’s tweet acknowledging the influencer’s groin. “That is just oh terrible.”

“But then you didn’t stop there,” the influencer continued.

Mulvaney referenced a Thursday tweet in which Jenner shared a New York Post article covering the controversy surrounding the two.

“There is a difference between acceptance and tolerance, and normalizing exposing your genitals in a public way and a public place. I do not support that at all, in the slightest. Dylan…congrats your trans with a penis,” said Jenner in a Thursday tweet.

There is a difference between acceptance and tolerance, and normalizing exposing your genitals in a public way and a public place. I do not support that at all, in the slightest. Dylan…congrats your trans with a penis. https://t.co/ibcVN6SkTb

“Girl, you’re making me sound like I’m some creepy flasher exposing myself!” Mulvaney said countering Jenner’s argument by referring to the women’s shorts he wore in the video as “perfectly normal.”

“If you can think back to your early days of transitioning and remember being embarrassed about your body or having strangers give you dirty looks,” Mulvaney said, attempting to relate to Jenner over their experience identifying as transgender woman. “That’s why I made that video.”

Mulvaney claimed he started his “days of girlhood” series on TikTok citing “shame of being newly trans” and further noting Jenner had undergone medical gender transition surgery which Mulvaney reportedly claimed he couldn’t seek because he hasn’t been on hormones long enough. The TikTok influencer claimed Jenner’s comments made him feel unwilling to share his thoughts on medical gender transition but noted he would be seeing the same surgeon as the former Olympian.

“I don’t think I have interest in getting to know you because the way you use your platform to publicly degrade me. It told me everything I needed to know about you,” Mulvaney continued. “A trans person invalidating another trans person’s transness is pretty evil in my eyes.”

“This whole situation — it feels like the movie Mean Girls.”

Mulvaney noted he had been called a “freak,” a “child predator,” and an “absurdity” in the week following Jenner’s comments before saying “this isn’t some trend for me.” 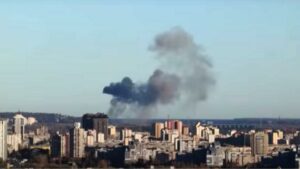