President Joe Biden will make his first trip to the United States-Mexico border on Jan. 8.

During his more than 40 years in federal politics, Biden has never gone to the border — where his response to an illegal immigration crisis has made him increasingly unpopular.

“I will visit the border myself this Sunday, in El Paso, to assess border enforcement operations, meet with the local officials and community leaders and the folks at the border sending me what they need that they don’t have, and make it public what they conclude they need they don’t have to try to convince my Republican colleagues they should do something,” Biden said while speaking at the White House on Jan. 5. “I know that migration is putting a real strain on the borders and on border communities. They can’t do but — anything but that.

Biden will also meet with President López Obrador in Mexico to discuss “strengthening our border between our nations” as well as the climate crisis and economic development.

“Our problems at the border didn’t arise overnight and they’re not going to be solved overnight,” Biden said. “It’s a difficult problem.”

During the last two years, the Biden administration has sent lower-ranking officials to the border despite repeated invitations from elected officials including California Congressman Kevin McCarthy, Tennessee Senator Marsha Blackburn, Texas Governor Greg Abbott, and Webb County Judge Tano Tijerina. Biden was also asked to make a trip to the southern border by Catholic Charities of the Rio Grande Valley in 2021.

“I invite you to come and see for yourself, as your wife did in 2019, what is happening on the border,” wrote Sister Norma Pimentel, the executive director of the organization, in an opinion piece. “There are many layers to the immigration realities behind the strident political rhetoric that dominates and obscures the issue today. But we must find ways to counter what Pope Francis calls a ‘globalization of indifference.’”

White House Press Secretary Karine Jean-Pierre falsely claimed in late November that Biden had been to the southern border. Her inaccurate remarks were quickly noted by media outlets. While deflecting the question from Fox News’s Doug Doucy, Jean-Pierre said Republicans were impeding resolving the border crisis because they were not showing a “willingness” to work with the Biden administration and were instead focused on “political stunts.”

During his remarks on Jan. 5, Biden similarly pointed blame at Republicans. The President suggested Republicans use the immigration crisis as a way to bolster their political careers but do not make an effort to intervene.

He said that Republicans opposed his “recent request for an additional $3.5 billion to secure and manage the border with more holding facilities, better transportation, additional funding for 2,000 new asylum officers and personnel, 100 new immigration judges to more rapidly adjudicate for people when they come here” at a time when more resources are needed at the border.

He pointed out that the US is a highly desirable destination for immigrants and that there needs to “be an orderly way” for immigrants to enter the country.

“I mean, look, if you think about it, there’s not a whole lot of countries people would rather live in than here,” he told reporters during a Q&A.

Biden did not address the issue of the incomplete border wall during his remarks. 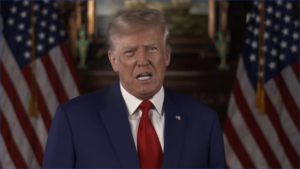