Republican politicians have repeatedly called on President Joe Biden to visit the borders and meet with officials there as the rates of illegal immigration continue to climb under his watch.

House Minority Leader Kevin McCarthy met with Biden on Nov. 29 and told reporters afterward that he “invited the president to go to the border” with him.

“He asked me about the border… so I told him about my current trip,” said McCarthy, who is vying to become the next Speaker of the House. “Just in El Paso… 70,000 people have come across in the last seven weeks. If we would send people back to the countries they came from, the border agents will tell you they would stop coming.”

“We know the president has never been down to the border. The possible next Speaker said that he wants him to go with him so is he going to?” pressed Doocy as the press secretary chuckled.

“So look — he’s been there. He’s been to the border,” Jean-Karine responded.

“When did he go to the border?” asked Doocy.

Jean-Pierre ignored the question, continuing, “Since he took office, President Biden has been taking action to fix our immigration system and secure our border.”

Jean-Pierre’s false statement was quickly pointed out by the media.

According to a fact-check from Breitbart, “Biden has never visited the southern U.S. border in 50 years in politics, though he was once driven by it in El Paso.”

Doocy posed the same question to Jen Psaki, the previous White House Press Secretary, in September of 2021. Psaki said she was unsure and would “check and see.”

The last time Biden may have been in proximity to the border is believed to be during the 2008 presidential campaign while stopping in El Paso, Texas.

Biden told CNN’s Anderson Cooper at a 2021 town hall that he had never been to the southern border.

“I guess I should go down. But the – but the whole point of it is: I haven’t had a whole hell of a lot of time to get down,” Biden said.

“Jean-Pierre previously came under fire in August for claiming to Doocy that illegal immigrants were not ‘walking across’ the border despite many images and videos suggesting otherwise,” reports Fox News. “Despite this, Jean-Pierre did not face any response from fact-checkers and has rarely faced any since she began serving as press secretary.”

One publication noted that Jean-Pierre did not specially name which border Biden had been to – leaving open the possibility that she was referring to the president’s March trip to a Polish town near the Ukraine border.

After deflecting Doocy’s question, Jean-Pierre claimed Republicans were an obstacle in solving problems at the border.

“But, you know, that — we’re not seeing that from Republicans. We’re not seeing a willingness to work with us on — on, you know, fixing a situation that’s been around for decades now,” she said. “Instead, they’re — they’re doing political stunts. That’s what they want to do.”

A group of 26 governors co-singed an appeal to Biden in September of 2021, asking him to “bring an end to the national security crisis created by eight months of unenforced borders.” 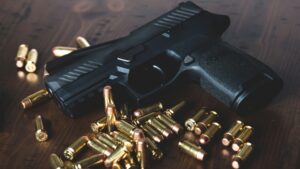