The premier of the British Virgin Islands was arrested on drug charges at a Miami airport.

Premier Andrew Fahie agreed to help federal informants transport thousands of kilograms of cocaine through his island nation’s port in Tortola. The informants were posing as a member of the Sinaloa cartel.

He was intercepted by authorities on April 28 while boarding a private plane at the Miami-Opa Locka Executive Airport. In his possession were shopping bags filled with a total of $700,000 in cash, according to federal documents.

“Why am I getting arrested?” Fahie reportedly asked the arresting officers. “I don’t have any money or drugs.”

The managing director of the British Virgin Islands’ port authority, Oleanvine Maynard, was arrested later the same day. Authorities alleged she took a $200,000 payment in connection to the drug smuggling scheme.

Her son, Kadeem Maynard, is said to have helped establish the deal. He was arrested and charged with drug conspiracy and money laundering, per NBC News.

Fahie and Oleanvine Maynard met with Drug Enforcement Agency Agents posing as Mexican drug traffickers at the airport. The scheme involved using the port in the Caribbean to smuggle cocaine from Columbia to Miami and New York according to investigators.

“Anyone involved with bringing dangerous drugs into the United States will be held accountable, no matter their position,” said DEA Administrator Anne Milgram in a statement. “Today is yet another example of DEA’s resolve to hold corrupt members of government responsible for using their positions of power to provide a safe haven for drug traffickers and money launderers in exchange for their own financial and political gain.”

Governor of the British Virgin Island John Rankin subsequently released a statement noting Fahie’s arrest was not made in connection to a separate government corruption investigation being conducted by the United Kingdom.

“It is my duty as Governor to inform you that this morning the Honourable Premier Fahie was detained in Miami on charges related to conspiracy to import a controlled substance and money laundering,” Rankin said. “As this concerns the arrest of a British citizen, the US Government has informed the UK Government of this arrest, as part of the usual process followed when a British citizen is arrested abroad.”

“I realise this will be shocking news for people in the Territory,” added the governor. “And I would call for calm at this time.”

Rankin said he believed the results of the Commission of Inquiry would be soon made public to avoid “unnecessary speculation,” per The Press Democrat.

The British Virgin Islands is a British Overseas Territory with an estimated population of 35,000. While the governor is appointed by the British monarch and has executive authority, the premier is elected by the people during a general election to lead the government.

Deputy Premier Natalio Wheatley has been tapped to serve as Acting Premier. 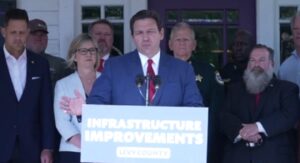