Florida Governor Ron DeSantis did not hold back as he blasted the Biden administration’s creation of a new “Disinformation Governance Board” within the Department of Homeland Security during a press conference on Friday.

DeSantis referred to the board as the “Ministry of Truth,” referencing the dystopian novel Nineteen Eighty-Four, by George Orwell.

Speaking to reporters in Williston, DeSantis started the discussion about the board by saying that he “honestly thought it was just a belated April Fool’s joke.”

“They are actually going to create in the Department of Homeland Security, a Bureau of Disinformation. It’s basically a Ministry of Truth. What they want to do is they want to be able to put out false narratives without people being able to speak out and fight back,” DeSantis said. “They want to be able to say things like ‘Russian collusion’ and perpetuate hoaxes and have people like us be silenced.”

DeSantis said that the Biden administration wants to be able to “advocate for COVID lockdowns, they want to advocate for school closures,” and to stifle any dissent.

The Biden Administration’s creation of a “disinformation” bureau within DHS is effectively a Ministry of Truth that is alien to our constitutional tradition.

“We reject this bureau in the state of Florida,” DeSantis continued. “We believe it’s essential that individual Floridians and Americans be able to speak out against false narratives trying to be jammed down our throats by this regime.”

DeSantis took aim at the leader of the agency, Nina Jankowicz, pointing out that she is an “advocate for COVID lockdowns who herself has put out disinformation about the Hunter Biden tapes, who supported Russian collusion conspiracy theories.”

“This is not acceptable, and in Florida we’re not going to have it,” DeSantis said.

DeSantis added that the Democrats “are not doing well,” and instead of trying to do better, they are trying to “shut up everybody who is criticizing your bad policies.”

.@GovRonDeSantis Calling Out The Biden Administration’s Plan To Set Up A “Disinformation Governance Board”

“It’s basically a Ministry of Truth”

“We reject this bureau in the state of Florida.”

“We’re not going to let Biden get away with this one. So we will be fighting back.” pic.twitter.com/3JoolThnVt

“The public is sick of this,” he said.

The governor also expressed his support for Elon Musk’s purchase of Twitter in defense of free speech.

“You cannot have a Ministry of Truth in this country,” DeSantis said. “We’re not going to let Biden get away with this one. We will be fighting back.”

According to a report from the Associated Press, the Disinformation Board’s aim will be to “counter disinformation coming from Russia as well as misleading information that human smugglers circulate to target migrants hoping to travel to the U.S.-Mexico border.”

“The spread of disinformation can affect border security, Americans’ safety during disasters, and public trust in our democratic institutions,” the department said in a statement on Wednesday.

The board is being widely slammed by Republicans.

“Rather than police our border, Homeland Security has decided to make policing Americans’ speech its top priority,” Missouri Sen. Josh Hawley tweeted in response to the news. 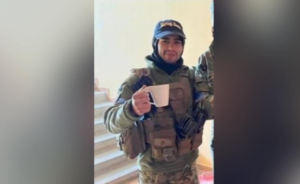