A taxi explosion outside Liverpool Women’s Hospital in England on Sunday is being investigated as an act of terrorism.

The explosion took place just before 11 a.m. on Remembrance Sunday, when Britain honors those who have died in the two World Wars and subsequent conflicts.

Russ Jackson, the head of Counterterrorism Policing in northwest England, announced during a press conference on Monday that a passenger had detonated an explosive device in the cab.

“The fare – a man – had asked to be taken to Liverpool Women’s Hospital, which was about 10 minutes away,” Jackson said. “As the taxi approached the drop-off point at the hospital an explosion occurred from within the car. This quickly engulfed it in flames.”

The male passenger, who has not been publicly identified at this time, was killed in the blast. The driver, who has been identified as David Perry, was injured, but survived.

Liverpool Mayor Joanne Anderson is praising Perry for his actions during the incident, saying that he locked the doors so the passenger could not escape.

“The taxi driver, in his heroic efforts, has managed to divert what could have been an absolutely awful disaster at the hospital,” Anderson told the BBC.

According to a report from the Associated Press, Jackson said that “enquiries will now continue to seek to understand how the device was built, the motivation for the incident and to understand if anyone else was involved in it.”

Three men in their 20s who are believed to be “associates” of the passenger were arrested under the Terrorism Act on Sunday. A fourth person was detained on Monday.

“Although the motivation for this incident is yet to be understood, given all the circumstances, it has been declared a terrorist incident,” Jackson stated.

Law enforcement searched two addresses connected to the passenger and found “significant items” related to their investigation at one of them, though they have not announced what they were. Eight families have been evacuated from homes nearby. 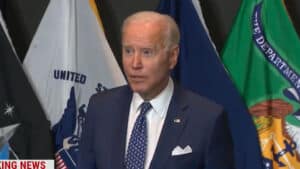