As the new 'Star Trek' series demonstrates, we are all live in the same reality but we're watching different versions of it

I’ve always been Team Star Wars, so when a clip from the latest Star Trek reboot dropped I didn’t pay much mind. But when Twitter user Stonewall1776 dropped an analysis saying they depicted J6 kicking off the end of the world, I tuned in.

So we open with an uncool, definitely not-Star Wars setting in some kind of a room on some kind of lame spaceship — maybe? This appears to be set in the future, which is less cool — once again — than “a long time ago in a galaxy far, far away,” but I digress.

It appears there is a spaceman acting as a mediator between two groups of other space people. This spaceman survived the end of earth, and he goes on to tell them about it using some kind of hyper-advanced PowerPoint presentation he happens to have literally keyed up and ready to go. Damn these Trekkies are efficient.

So this Spaceman — I’ll call him “Aydyn” for the sake of not having to pretend that’s not the most popular name of future adult men in post-apocalyptic earth — opens with, “I’ve seen my future. Let me tell you about yours.” And bam — Ayden clicks on that PowerPoint presentation like a seasoned Xennial about to run for assistant yearbook editor of the Junior class

“Our conflict also started with a fight for freedoms,” Aydyn begins. “We called it The Second Civil War.” At this time, Aydyn is speaking over a montage of events from what appear to be the January 6 protests. Now this dichotomy could be interpreted two ways: One, that January 6 was the downfall of America or two, the downfall had already happened and January 6 was the start of the fight to save our country.

This is so pathetic. The new Star Trek show depicts what appears to be the January 6 protest leading to the end of the world and the human race as we know it 😂🤣 pic.twitter.com/Ubmcqgjsi8

Either way, this is our ever-present tug of war in a country where most people are just trying to succeed while trapped between two realities: one logical, with a crippling national debt, mandates, a supply chain crisis, and record inflation, and the other fantastical, where we are literally sex slaves in red cloaks fighting Lord Voldemort for equal pay to kick a ball.

Aydyn continues, “Then the Eugenics war.” Again, here is another stark contrast of what that could mean depending on whether you are rational or irrational; a day laborer or a handmaiden

Eugenics is the study of how to arrange reproduction within a human population to increase the occurrence of heritable characteristics regarded as desirable. A logical person would be a student of history and note this was a major theme of World War II. Hitler wanted to exterminate the Jewish population and other “undesirables” like gypsies and redheads (crap). He had a mating program to create a master “Aryan” race, and his lead “doctor,” Josef Mengele, conducted experiments on men, women, children, and twins. He was a Eugenicist. That was a Eugenics War.

To go toward more current events, Roe v Wade is back in the limelight and the founder of Planned Parenthood, Margaret Sanger, was a eugenicist who famously targeted impoverished black communities with her facilities.

And if you want to talk about eugenics today, we have Bill Gates discussing depopulation and some Pfizer documents they don’t want you to see regarding the vaccination they forced many of you to get against your will if you wanted to feed your families.

But If you’re irrational, you’ll immediately think the Eugenics war is…

The Republicans won’t stop with banning abortion. They want to ban interracial marriage. Do you want to save that? Well, then you should probably vote. https://t.co/MRytdsjUBP

While Aydyn is speaking about the Eugenics War, footage of what looks like 2020’s Summer of Love is playing (which was months before J6, but do with that what you will).

But moving on, Ayden continues: “And then finally just…World War Three.”

A logical person might worry World War III is approaching because America is funding a proxy war with Russia via Ukraine, whereas an irrational person may think World War III will start because of, I don’t know, “Russian Collusion” or something, I have no idea anymore; the plot is just lost.

Aydyn goes on, “This was our last day. The day the earth as we knew it ceased to exist.” Then, over footage of nukes: “It started as an eruption in one nation, [and] ended in the eradication of 600,000 species of animals and plants and 30% of the first population.”

“Global suicide,” Aydyn’s voice echoes throughout the not-Millennium Falcon. “What we gave you was the means to exterminate yourselves. And from the looks of you, you’re gonna do it. You will use competing ideas of liberty to bomb each other into rubble just like we did and then your last day will look just like this.”

Now I have sat quietly by while Aydyn — on his mediocre spaceship with his lack of lightsabers and glaring absence of Wookiees — spoke about World War III, but I will not be silent any longer over his reimagined idea of war.

Wars are freedom versus tyranny or tyranny versus tyranny — period. They are not liberty versus liberty. There is always someone trying to oppress and always someone trying to escape. Wars can also be fought between two tyrants over one oppressed. But liberty is freedom, freedom is leaving each other alone, and two groups who want to leave each other alone are not at war — that is the definition of peace. You suck, Aydyn.

So logically, we are all living the same reality, but we as Americans are watching two screens of what is happening around us: one celebrates the hero and one sympathizes with the antihero. Where one sees a 6, the other sees a 9 and to me, the Star Trek scene tried to capture both audiences in a way where they would not alienate (lol see what I did there?) one or the other.

The thing about life is there is always something bad that happens. But do you overcome what tried to destroy you or do you become it? That line is also hazy, but as Qui-Gon Jinn said, “Your focus determines your reality.” 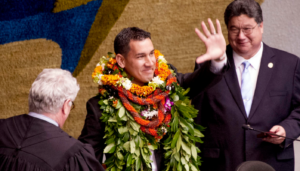