Without Increased Supply Domestically, US Gas Prices Are Expected To Soar to Record Highs

The price for a barrel of oil increased $3 per gallon amid an Oct. 5 announcement by the Organization of the Petroleum Exporting Countries (OPEC) that it would cut oil production by two million barrels per day.

The cut by OPEC+ is about the equivalent of two percent of the global oil supply and double the amount the U.S. has been releasing from its Strategic Petroleum Reserve (SPR), according to The Hill.

Planned cuts by OPEC+ are the largest since 2020 and could result in a dramatic rise in oil prices, which — prior to the announcement — were down to about $90/barrel from $120/barrel.

CNN reported officials at the White House were “having a spasm and panicking” over the prospect of OPEC+ cutting oil output.

A U.S. official said the White House is “having a spasm & panicking.”

President Joe Biden announced his administration would begin releasing a record amount of oil from the SPR this spring in an effort to head off rising gas prices. The White House pledged to drain one million barrels a day for six months, placing the end of the oil releases at the end of this month. But, the administration extended the releases into November.

Biden’s on track to practically empty our strategic oil reserves to get Democrats elected in November.

Cancelling the Keystone Pipeline was a history-book-level screw up. pic.twitter.com/L8OqFzX23j

On Oct. 4, Press Secretary Karine Jean-Pierre told reporters that the White House is not considering any new releases from the SPR.

For months, the Biden administration requested OPEC+ member nations (which includes Russia) not to reduce supply to the global market, even traveling to Saudi Arabia in July to plead in person.

“Higher oil prices, if driven by sizable production cuts, would likely irritate the Biden Administration ahead of U.S. mid-term elections,” an analyst for Citi said. “There could be further political reactions from the U.S., including additional releases of strategic stocks, along with some wildcards including further fostering of a NOPEC bill (antitrust legislation against OPEC).”

“This is beyond the pale,” the California Democrat told CNN. “They are actively fleecing the American people and destabilizing the economy. That’s just outrageous. Who do they think they are?”

“They are not our allies,” he said. “They are hurting the American people. And we need to be tough with them. The president needs to make it clear we will cut off their supply. We could ground their air force in a day.” 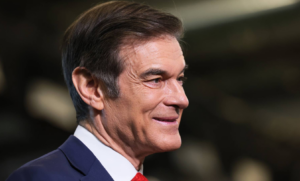 Dr. Oz Reportedly Killed Over 300 Dogs, Hundreds of Other Animals In Experiments