Only Donald Trump Can End the War in Ukraine: Viktor Orbán

Hungarian Prime Minister Viktor Orbán is calling for negotiations between Russia and the U.S. over the conflict in Ukraine to be mediated by former U.S. President Donald Trump.

During a recent trip to Berlin, Orbán stated that President Joe Biden “has gone too far” in remarks about Russian President Vladimir Putin, which has made it unlikely Biden can be successful in resolving the crisis.

“Hope for peace is Donald Trump,” Orbán said during a public interview with the German magazine Cicero.

Orbán and Trump have had a productive friendship and shared a similar worldview since the time of Trump’s presidency based on policy priorities on issues including migration, security, the nation, family, and patriotism, according to Hungarian Foreign Minister Péter Szijjártó.

Orbán noted that the only reason Ukraine can even fight this war is because it is militarily supported by the U.S., saying “The ceasefire does not have to come about between Russia and Ukraine, but between America and Russia.”

Orbán said: “Who thinks this war is through Russian-Ukrainian negotiations is completed, he does not live in this world. The reality of power is different. That is why the Americans have to agree with the Russians. And then the war is over.”

He also criticized EU sanctions against Russia and called for the EU to reevaluate its energy strategy so as to not simply “switch masters” in its pivot from depending on Russia to depending on the U.S.

“If we had done the sanctions right, energy prices would not be soaring,” the prime minister said. “Sanctions could be launched in a way that we do not destroy ourselves in the area of energy, but the commission has failed to do so.”

Trump recently hosted Orbán at one of his luxury golf resorts and called Orbán a “friend” — a sign the two world leaders’ cozy relationship extends beyond the confines of binational political association.

Editor’s Note: A previous version of this article included the statement that Orbán was a “darling” to U.S. Republicans and conservatives. This comment has been removed because it represents a framing problem in an otherwise straightforward news story. 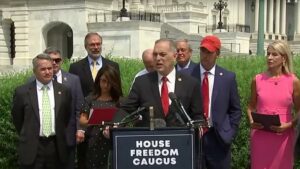