The Oklahoma Supreme Court has overturned the historic $465 million judgement against Johnson & Johnson, saying that the lower court had applied the state’s public nuisance law incorrectly in order to allow it to apply to opioids.

The verdict was overturned in a 5-1 decision.

In 2019, Cleveland County Judge Thad Balkman found Johnson & Johnson and its subsidiary Janssen Pharmaceuticals to be liable for the opioid epidemic in the state because they had made “false, misleading, and dangerous marketing campaigns” about their prescription drugs.

The $465 million judgement was to fund one year of the state’s recovery plan, which included 21 programs to combat rampant opioid abuse. State officials had been requesting $17.5 billion.

The Hill notes in their report that “Tuesday’s ruling from Oklahoma’s highest court could be a blow to the lawsuits brought by more than 3,000 state, tribal and local governments, which argue opioid manufacturers, marketers and distributors created a public nuisance by flooding communities with highly addictive drugs.”

“Some of those trials are already underway in a federal court in Cleveland and a state court in New York. A ruling is expected soon in a West Virginia trial,” the report explains. “Less than two weeks ago, a judge in California ruled four drug companies were not responsible for the state’s opioid epidemic, and the plaintiffs did not prove the companies caused a public nuisance.”

The Supreme Court said in their decision that overturning the judgement is not meant to minimize the severity of harm caused by the drugs.

“In reaching this decision, we do not minimize the severity of the harm that thousands of Oklahoma citizens have suffered because of opioids. However grave the problem of opioid addiction is in Oklahoma, public nuisance law does not provide a remedy for this harm,” Justice James Winchester wrote for the majority.

“A product manufacturer’s responsibility is to put a lawful, non-defective product into the market. There is no common law tort duty to monitor how a consumer uses or misuses a product after it is sold,” Winchester continued.

The majority compared the ruling to making a sugar or fast food company liable for obesity.

Justice James Edmondson, the lone dissent, argued that the majority’s view of public nuisance was too narrow. 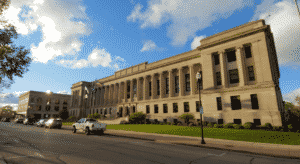 Rittenhouse Jury Was Recorded Outside of the Court House, Trial Judge Says