Number of Americans Who Believe in God Drops to Record Low

The groups with the largest declines are liberals and democrats

A new Gallup poll shows that a record number of people no longer believe in God.

The May 2-22 Values and Beliefs poll found 17 percent of Americans say they do not believe in God. Between 1944 (when the poll first started) and 2011, more than 90 percent of the country believed in God. 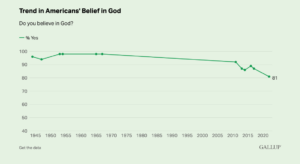 According to the data, belief in God has dropped most among young adults and people who identify left-of-center politically — specifically, liberals and Democrats. Those groups showed a drop of at least 10 percentage points when comparing the 2022 figures to an average of the 2013-2017 polls.

“The groups with the largest declines are also the groups that are currently least likely to believe in God, including liberals (62%), young adults (68%) and Democrats (72%),” Gallup found. “Belief in God is highest among political conservatives (94%) and Republicans (92%), reflecting that religiosity is a major determinant of political divisions in the U.S.”

This data overlaps with a prior Gallup study, which showed church membership among Americans had plummeted to an all time low since 1937, when the polling firm first measured it.

Gallup also found that church membership “strongly correlated with age , as 66% of traditionalists — U.S. adults born before 1946 — belong to a church, compared with 58% of baby boomers, 50% of those in Generation X and 36% of millennials.”

Most Americans believe in God, whether that means they believe that higher power responds to prayers or not, Gallup said. But, as the company notes, sharp drops in church attendance and membership suggest that the practice of organized religion may be changing more than a belief in a supernatural God. 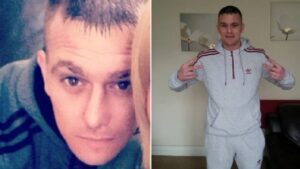