A New Jersey woman has been sentenced to three years in prison for running a GoFundMe scam that raised over $400,000 with a fake story about a heroic homeless man.

Katelyn McClure, 32, and her then-boyfriend Mark D’Amico had concocted a fake story in 2017 about a homeless vet named Johnny Bobbitt Jr. who spent his last $20 to help her fill up her tank after she ran out of gas.

McClure pled guilty in New Jersey Superior Court in April 2019 to Theft by Deception, but the case was put on hold while she faced federal charges for the crime.

The couple then created a GoFundMe titled “Paying it Forward,” claiming to raise money to help the man turn his life around.

D’Amico and McClure became media darlings for their fundraiser and raised over $400,000 from 14,000 donors. They withdrew the funds to their personal accounts and began using them for their own expenses.

Their plan unraveled when Bobbitt heard about the fundraiser and sued the couple.

The couple claimed that he was on drugs and that they did not want to hand over the massive sum until he was clean.

Bobbitt later admitted to helping come up with the scam and was sentenced to five years of probation.

McClure was not present at the state sentencing because she is serving a one-year federal term in Connecticut over the fraud.

“Her state sentence will run concurrently and the former New Jersey Department of Transportation worker will be permanently barred from ever working as a public employee in the state,” the Post report says. “D’Amico, 43, pleaded guilty in December 2019 and was sentenced to five years in state prison, a term also running concurrently with an earlier federal term. He and McClure have both been ordered to fully reimburse GoFundMe”

The Burlington County Prosecutor’s Office stated that “at the time, it was the largest fraud perpetrated through the crowdfunding company. GoFundMe voluntarily reimbursed the donors.”

“This sentencing brings to a close a case that defrauded more than 14,000 people whose decency and compassion for others elicited a tremendously heartwarming response to assist someone they believed was truly in need,” Prosecutor Bradshaw said. “With the new year comes new hope for a better world, and our wish is that prosecutions like this will serve to deter criminals from such deceitful actions, but not discourage individuals from caring about those who are in crisis as a result of a tragedy, or simply need a helping hand after experiencing a hardship or setback.” 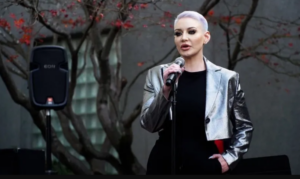