Twitter allegedly suspended Nicki Minaj’s account after her decision to wait to get vaccinated sparked intense controversy. The rapper then took to Instagram Live to discuss her fears about restrictions on speech.

“People will turn their back on you if you don’t — not only not agree, F*** agreeing. But people will isolate you if you simply speak and ask a question. Y’all don’t see what the f*** is happening?” she asked her followers in the video.

She added, “Here’s what’s interesting. So many of your favorite artists feel this way but they are afraid to speak up. And I can’t blame them. Look at what they just did. I will never use Twitter again.”

On Monday, Minaj said she would not be attending the Met gala because they required guests to be fully vaccinated. She tweeted that she wanted to do more research before getting the jab. She later added that she did not want to risk having to isolate away from her young son and that a family friend had a serious adverse reaction to the vaccination.

After she was denounced by politicians like British Prime Minister Boris Johnson and popular medical experts like Dr. Anthony Fauci, Minaj said she was suspended from Twitter on Wednesday afternoon.

Twitter denied having sanctioned Minaj. A company spokesperson told Vulture,“Twitter did not take any enforcement action on the account referenced.”

In addition to denouncing Twitter, Minaj used her Livestream to compare her removal from the platform with the censorship rules she was made aware of when performing in China.

The rapper noted she used to brush off what she perceived to be conspiracies, but her recent treatment prompted her to question the intentions of media companies.

“What in the world scared y’all that much to disable my f****** Twitter?” she asked. “It is scary when they start telling you you can’t ask a question about anything.”

Minaj said she is writing something “really important about all this” and that she’d be back to update her fans soon.

The Guardian reports “the White House said that they’ve offered such calls with others concerned about the vaccine, part of an aggressive public relations campaign to beat back rampant disinformation about the vaccine’s safety and effectiveness.”

The Trinidad native told her fans on Twitter that she had been invited to the White House and would be going.

Editor’s Note: a previous version of this story mistakenly referred to Minaj as a New York native and has been updated accordingly. 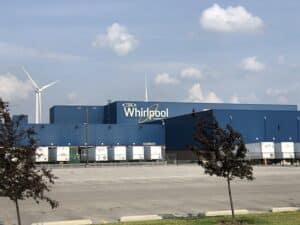 Whirlpool Offers Employees $1,000 to Get Vaccinated As Companies Ramp Up Incentive Programs