Whirlpool Offers Employees $1,000 to Get Vaccinated As Companies Ramp Up Incentive Programs

Whirlpool employees can get $1,000 if they get vaccinated.

“We have strongly encouraged all of our employees to get vaccinated since the doses were made available earlier this year. Several onsite vaccines [sic] drives have been hosted at Whirlpool Corporation locations around the world — including our global headquarters and many of our U.S. manufacturing sites,” the company said in a statement.

Like many companies, the appliance maker is hoping to convince workers to get the COVID-19 shots. Dollar General, Aldi, and Trader Joe’s are among those trying to encourage vaccinations through cash bonuses or other incentives.

Grocery store chain Kroger began offering its employees $100 to get vaccinated in February.

“As we move into a new phase of the pandemic, we’re increasing our investment to not only recognize our associates’ contributions, but also encourage them to receive the COVID-19 vaccine as it becomes available to them to optimize their well-being as well as the community’s,” Kroger’s chief people officer, Tim Massa, said in a statement at the time.

The Equal Employment Opportunity Commission (EEOC) has said employers may need to reasonably accommodate those employees who would be at risk if they were to received the vaccine, including granting them exemptions from vaccine mandates.

Incentives could convince those fearful or hesitant to get the vaccine to comply, according to some legal experts.

However, the EEOC has not clearly define which incentives are not considered “coercion” as prohibited by the Americans with Disabilities Act.

The organization had at one point said “that a water bottle is not coercive, but a gym membership is. (On balance, a few hours of paid time off seems to fall toward the non-coercive side of the scale.). In addition, if the employer (or their contractors) are administering the vaccine, this could unintentionally create a ‘group health plan’ under the Employee Retirement Income Security Act of 1974 (ERISA); this would create unforeseen employer compliance obligations,” writes the National Law Review.

“The United States is averaging over 1,800 COVID-19 deaths and 170,000 new cases per day, the highest levels respectively since early March and late January. And both figures have been on the rise over the past two weeks,” reports Q13 Fox. “The country is still well below the terrifying peaks reached in January, when it was averaging about 3,400 deaths and a quarter-million cases per day.”

Approximately 900,000 vaccinations are administered each day in the United States. 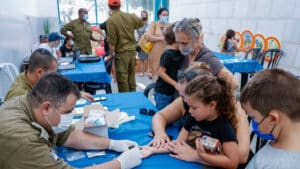 5 responses to “Whirlpool Offers Employees $1,000 to Get Vaccinated As Companies Ramp Up Incentive Programs”