“The articles ranged from ‘serious’ mainstream news articles, such as a Washington Post story from January 2017 about Paul Ryan stopping somebody from dabbing in a photo, a Huffington Post article from May 2017 about Martin Shkreli being permanently banned from Twitter, and an article from the Australian’s Herald Sun from June 2016 about the age of an Australian NBA player,” the report continues. “Other affected sites including Vox, the Mirror, Rolling Stone, Business Insider Australia, Newsweek, Kotaku, Vanity Fair, and most disturbingly, Teen Vogue. Readers should be aware that these links contain the unredacted pornography.”

It appears that a video player called Vidme was previously used by numerous news sites to embed videos into their stories, but the company ceased to exist in 2017. The company announced on Reddit that they would be shutting down on December 15 and would no longer accept new uploads or members. They stated that this was due to not being able to find a sustainable business model due to increasing competition.

After the shut down,  all embedded videos displayed a simple broken link — until now. 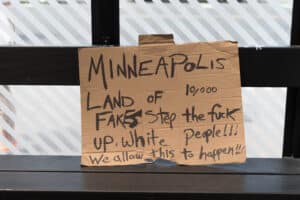 Race Relations in the U.S. Plummet for the Second Year in a Row