Despite shootings and robberies nearly doubling and murders up by 50%, NYC leadership moves to reduce penalties for many crimes

Manhattan’s new district attorney has unveiled a sweeping new policy to reduce prison sentences as a penalty and downgrade or dismiss charges for many felony crimes.

Alvin Bragg, who took office over the weekend, revealed his progressive new approach in a memo released on Monday.

Bragg said in his memo that offenses like marijuana misdemeanors, prostitution, resisting arrest, and fare-dodging would no longer be prosecuted.

The directive for reduced penalties comes amid concerns of a surge in crime in New York City.

Crime statistics published in December by the NYPD showed that shootings and grand larceny have nearly doubled, with murder up 50 percent in the city since 2019.

Amid the changes announced by Bragg, prosecutors have also been told not to seek bail requirements for suspects awaiting trial.

The memo also points to instances where charges may need to be reduced, including armed robbery and drug dealing.

Bragg also vowed to stop prosecuting many low-level offenses, including subway turnstile jumping, prostitution, and trespassing. He also has promised to continue a standing policy of declining to prosecute marijuana possession.

“I believe that he’s going to be a good district attorney, and I’m going to sit down and have a conversation with him as we build out what we need to do around public safety,” the mayor said at a press conference on Tuesday.

In just his first few hours as mayor, Adams had to confront New York City’s spiraling crime problem while using public transportation to arrive at City Hall. During the ride, he had to stop and call 9-1-1 to report an assault in progress.

Three men are fighting on the street in view of @NYCMayor at Kosciuszko J stop; he called 911 pic.twitter.com/CTgHODQuT7

Adams has replaced former Mayor Bill de Blasio, who left behind a city plagued with rising crime and a weakened police force. 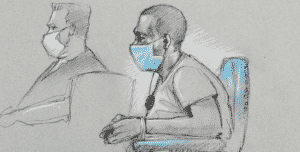