New York Times journalists and staffers are on a 24-hour strike after union negotiations for new contracts failed.

Over 1,100 employees at the newspaper are estimated to be participating in the strike, which began on Thursday at midnight.

To our readers: We did not make this decision lightly. We are deeply committed to the success of the @nytimes. We also know that we produce our best work when we feel valued and are treated equitably. Thank you for standing by us today. pic.twitter.com/5Phd53ZeRP

“It’s disappointing that they’re taking such drastic action, given the clear commitment we’ve shown to negotiate our way to a contract that provides Times journalists with substantial pay increases, market-leading benefits, and flexible working conditions,” Meredith Kopit Levien, president and chief executive of The Times, said in an email to the company Wednesday night, according to a report from CNN Business.

Kopit Levien added that the Times has “plans in place to ensure that we meet our obligation to our readers and the general public by reporting the news as fully as possible through any disruption caused by a strike.”

We invite everyone in the NYC area to join us on the picket line at 620 8th Avenue (40th & 8th) today in support of our Times Guild coworkers!

Supporters can also join remotely by following @NYTimesGuild, which will livestream the event at 1 p.m. ET!

The report added that Joe Kahn, executive editor of The Times, wrote a note to staff saying, “We will produce a robust report on Thursday. But it will be harder than usual.”

CNN noted that “the union has asked The Times to meet in the middle on wage increases, but the newspaper believes the union started from an extreme position, making doing so a non-starter.”

Amanda Hess, a critic-at-large for the newspaper, urged people not to read the paper’s content during the strike.

We’re asking readers to not engage in any @nytimes platforms tomorrow and stand with us on the digital picket line! Read local news. Listen to public radio. Make something from a cookbook. Break your Wordle streak.

National correspondent Dana Goldstein tweeted, “Today I walked off a job I love. I want NYT to be successful, & it is! With operating profit over $300 million, we’re asking for an additional $30-40 million in wage increases during a housing crisis in the world’s most expensive city. We have members who earn less than $50,000.”

Today I walked off a job I love. I want NYT to be successful, & it is! With operating profit over $300 million, we’re asking for an additional $30-40 million in wage increases during a housing crisis in the world’s most expensive city. We have members who earn less than $50,000.

The journalists and staff are represented by the NewsGuild of New York union, which said in a statement that the strike is “due to the company’s failure to bargain in good faith, reach a fair contract agreement with the workers, and meet their demands.”

New York Times walkout protesters chant “40% of the profits” and “prints not dead” outside of the @nytimes building in NYC pic.twitter.com/Wb99zeAJug

The strike is the first one at the Gray Lady in decades.

Union members picketed outside the building on Thursday. 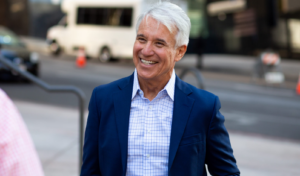