State-issued identification in New York will now include the genders male, female, and X.

Governor Kathy Hochul said the new policy would take effect during Pride Month was would support transgender and non-binary residents in the state.

“As we prepare to celebrate Pride Month in a few days, I am excited to announce this historic change that represents another victory in our fight to help ensure equality and respect for the LGBTQ+ community,” Hochul said in a statement on May 27.

“Every person, regardless of their gender identity or expression, deserves to have an identity document that reflects who they are,” the governor added. “My administration remains committed to ensuring that New York is a place of value, love and belonging for members of the LGBTQ+ community.”

The policy goes into effect on June 24. Anyone who does not want to appear in person to change with state ID will have the option to request new documentation online in July of 2022.

Hochul’s government praised the new policy for “making it easier for people to change their names, change their sex designation and change their birth certificates to reflect their identity.”

“Perhaps more than any other state agency, New Yorkers directly engage with their government through the DMV, so offering identity documents that are representative of all New Yorkers is a significant milestone,” said Department of Motor Vehicles Commissioner Mark J.F. Schroeder. “We are thrilled to implement this new option that we know will have a positive impact on the lives of so many of our customers.”

Priya Nair, the state’s Deputy Chief Diversity Officer, who identifies as transgender, thanked the governor in a statement. Nair said the new policy was “an action which demonstrates that New York State affirms and sees me for who I am.”

“As other states attack and roll back protections for transgender people, I am proud to live in a state that will continue to fight for our communities, “ said Nair.

The change was made as part of the state’s Gender Recognition Act. Any driver’s license, learner permit, or non-driver ID card issued at any Department of Motor Vehicle office in the state will provide individuals the option to list select X as a gender.

The law included an amendment that courts granting name changes are not required under any circumstances to send “notice to United  States immigration and customs enforcement, United States customs and border protection, United States citizenship and immigration services, or any successor agencies, or any agencies having similar duties.”

“A name change order or other documentation of name change shall be sufficient to change the petitioner’s name on any document or record issued or maintained by the state of New York or any subdivision thereof, or any private entity, including but not limited to, all school records for current and past students, archival records and marriage certificates,” the policy states.

Any public or private entities that do not comply could be found in violation of nondiscrimination laws. 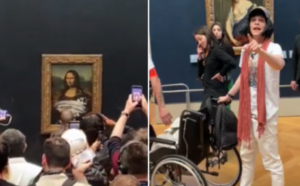 Mona Lisa Hit with Cake by Man in Wig