Mona Lisa Hit with Cake by Man in Wig

The painting, which is encased in bulletproof glass, was unharmed

The man, wearing a wig and lipstick, arrived at the Louvre museum in a wheelchair. After throwing the cake at the 16th-century painting, he yelled to the assembled crowd to think of planet Earth.

The same unidentified man was seen throwing roses in the gallery.

The da Vinci painting is always displayed behind a pane of bulletproof glass, which was smeared with the white cake. Museum workers cleaned the glass and the painting remained unharmed.

Videos of the man have circulated on social media.

Maybe this is just nuts to me💀but an man dressed as an old lady jumps out of a wheel chair and attempted to smash the bullet proof glass of the Mona Lisa. Then proceeds to smear cake on the glass, and throws roses everywhere all before being tackled by security. 😂??? pic.twitter.com/OFXdx9eWcM

While he was escorted out of the gallery by museum security guards, the man yelled an apparent explanation to the visitors.

An internationally recognized piece of art, the “Mona Lisa” has an estimated value of $1 billion. It was created by da Vinci between 1503 and 1519.

The painting has also been attacked previously in the name of a number of causes.

The Renaissance masterpiece was placed behind glass in the 1950s after the lower portion of the piece was damaged during an acid attack.

In 1956, a Bolivian man threw a stone at the case which broke and damaged the left elbow of the painting. The incident prompted the museum to install bulletproof glass around the painting.

The case was painted on at least twice in the following decade.

While on display in the Tokyo National Museum in 1974, it was sprayed with red paint by a disabled woman who wanted to bring attention to the building’s lack of access ramps

A Russian woman who was denied French citizenship threw a ceramic cup at the painting in 2009. The teacup reportedly shattered, but the case and the painting were unharmed and museum staff did not close the gallery while they swept the floor.

The painting also gained global attention in 1911 when it was stolen by a museum employee.

The Louvre has not yet made a public comment on the incident. It is unclear if the man has been charged with a crime. 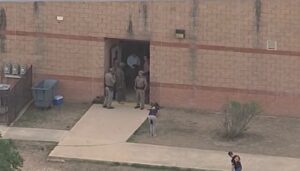