President Joe Biden’s mental health is a concern for nearly 6 out of 10 Americans.

Questions about Biden’s health, both cognitively and physically, have been posed since he announced his intention to seek the presidency.

Conservative participants were the most likely to have doubts about Biden’s mental health, with 82% expressing concern. Participants who identify as liberal are more likely to be unconcerned (67%) than concerned (32%).

“The fact is, based on these polling data, there is genuine concern among virtually all groups over Biden’s cognitive health,” reported Issues & Insights. “It has taken on political urgency with the looming 2022 midterm elections, which, if Republicans prevail, could well turn Biden into a lame duck.”

Biden’s year and a half in office have been marked by a number of gaffes that caught the attention of the American public.

A video of the president seemingly forgetting he had just shaken hands with Senate Majority Leader Chuck Schumer went viral on Aug. 9.

While delivering a speech about the Supreme Court’s decision to overturn Roe v. Wade on July 8, Biden seemed to misunderstand the teleprompter and inadvertently included the apparent instruction “end quote, repeat the line.”

Biden said, “One of the most important extraordinary parts of the decision, in my view, is the majority writes, and I quote — I’m going to quote now from the majority — ‘Women are not without electoral or political power, it is noteworthy that the percentage of women who register to vote and cast a ballot is consistently higher than the percentage of the men who do so,’ end of quote, repeat the line.”

“He said, ‘let me repeat that line,’” Simons replied to a post with a video of the moment.

Biden, who recently contracted COVID-19 and spent several days in isolation, allegedly went 40 seconds without blinking in a video address released on July 25.

“That’s unnatural, and raises a number of troubling questions about the president’s fitness to hold office,” alleged The Washington Free Beacon.

At the time, O’Connor noted that Biden was coughing and clearing his throat more severely and more frequently during speaking engagements. O’Connor said the president has exhibited the symptom for “as long as I have known him” and that Biden’s behaviors and mannerisms are subject to more public scrutiny than ever before but also acknowledged the “symptom was clearly present, and warranted detailed investigation.”

O’Connor also noted Biden’s “stiffer” gait but was not of major concern.

“President Biden remains a healthy, vigorous 78-year-old male, who is fit to successfully execute the duties of the Presidency, to include those as Chief Executive, Head of State and Commander in Chief,” O’Connor concluded. 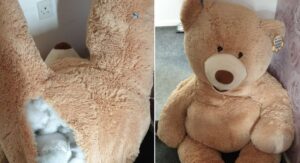