'If you decline to file in the New Hampshire primary... you may lose the first presidential primary of 2024,' the group wrote in a letter to President Joe Biden

Democrats in New Hampshire are appealing to President Joe Biden as the party considers altering the traditional order of presidential primaries.

New Hampshire has been the first state in the country to hold a primary since the 1970s. However, the Democratic National Committee voted on Dec. 2 to revise the longstanding order. Instead of holding the first primary in New Hampshire and the first caucus in Iowa, the DNC has opted to begin its presidential nomination process in South Carolina on Feb. 3, 2024.

Elected Democrats believe losing the first-in-the-nation primary slot would hurt Biden’s and the party’s success in the state.

“We believe it’s possible to keep New Hampshire at the beginning of the primary calendar and to elevate the influence of Black and Latino voters in this process,” the co-signers wrote in a letter to the president on Jan. 17. “The two things do not have to be mutually exclusive. When you balance what you lose to what you gain, there is no comparison.”

“While we share your desire to elevate more diverse voices in the process, we believe that the proposed schedule could wreak havoc on Democrats up and down the ticket in New Hampshire and unnecessarily jeopardize four critical electoral votes in your re-election campaign,” the group added.

The group noted the DNC has told Governor Chris Sununu, Senate Majority Leader Sharon M. Carson, and House Majority Leader Jason Osborne – all Republicans – that they must repeal a state law that requires the first presidential primary to be held in New Hampshire.

“All three of these Republican leaders have told the DNC that this is a non-starter, calling it ‘outrageous’ and likening it to ‘blackmail,’” per the letter.

The Democrats said moving New Hampshire from the first primary spot could have consequences for Biden’s potential re-election.

“If the DNC and your campaign withhold resources from New Hampshire or wait to begin building an organization until after the primary, it will greatly hinder our efforts to help you build a general election campaign in the state and it will allow the Republicans to out-organize us up and down the ballot,” the group told Biden. “We will need every resource at our disposal to help you be successful in 2024 and cannot delay our efforts to build a world-class campaign apparatus.”

Biden endorsed the change, which he said would benefit minority groups, on Dec. 1.

“We must ensure that voters of color have a voice in choosing our nominees much earlier in the process and throughout the entire early window,” Biden wrote in a letter to the committee. “Our early states must reflect the overall diversity of our party and our nation – economically, geographically, and demographically. This means more diverse states earlier in the process and more diversity in the overall mix of early states.”

Under the DNC’s current plan, New Hampshire and Nevada will hold the second and third primaries on Feb. 6, 2024, followed by Georgia on Feb. 13 and Michigan on Feb. 27. 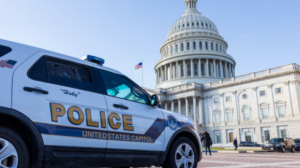 Capitol Police Say Threats Against Congress Have Nearly Tripled Since 2017