North Korea launched a missile over Japan for the first time in five years, marking the longest weapons test in its history.

Japan issued emergency evacuation orders and suspended trains, as the nuclear-capable missile — which is able to strike the U.S. territory of Guam — flew toward the island

A statement issued by the Prime Minister’s Office of Japan called the missile launch an “act that can potentially seriously impact the lives and property of the Japanese people.”

Instructions by the Prime Minister in Response to the Missile Launch by North Korea (07:31)

The launch of a ballistic missile in a manner that passes through the airspace over Japan is an act that can potentially seriously impact the lives and property of the Japanese people.

CBS reports that it only took 22 minutes for the missile to fly 2,800 miles (the distance from New York to California) before crashing into the sea.

The PM’s Office said the Japanese Government would confirm if residents suffered damage from falling debris, and coordinate responses with the U.S. and South Korea.

The launch was the fifth missile test in the last 10 days by North Korea. Over the course of this year, North Korea has test-fired about 40 missiles.

Military drills between the U.S. and South Korea, as well as South Korea and Japan, are likely what triggered North Korean leader Kim Jong Un to conduct the missile test, according to ABC News.

The launch was intended to send a clear message to the U.S., Park Won-gon, professor of North Korean Studies at Ewha University told Agency France-Presse (AFP).

“As these are missiles that can carry nuclear warheads, the launch also has a political goal of once again declaring North Korea a de-facto nuclear power and showing its complete denuclearization is impossible,” he said.

Won-gon added that the test demonstrates that Pyongyang has South Korea, Japan, and Guam within range and can target U.S. bases with nuclear weapons should war break out on the Korean Peninsula.

“The United States will continue its efforts to limit [North Korea’s] ability to advance its prohibited ballistic missile and weapons of mass destruction programs, including with allies and UN partners,” Watson added. 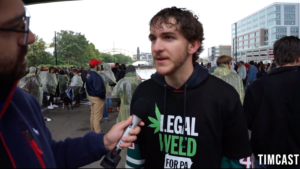