A newly published report found that over 70% of registered Muslim voters voted in the 2020 general election.

“Organizing is our legacy from our Prophet (S) who lovingly uplifted a movement that centered on human experience and the most vulnerable in the community,” Emgage wrote. “We organize for the strength and the benefit of our community. We organize so that, beyond elections, we can strategically build for the policy change we wish to see for years to come.”

Of the 71% of Muslim voters who participated in the election, 52%, approximately 779,793 million, cast absentee ballots.

North Carolina, Wisconsin, and Virginia also reported high Muslim voter turnout in both 2016 and 2020 with more than 71% of the registered voters casting a ballot.

Efforts to mobilize Muslim voters have also been underway in Europe for years, although they have not always been effective.

Emmanuel Macron, the newly reelected French president, was not well supported by his country’s Muslim population, which is reported to be the largest in Europe.

A 19th-century law prevents the French government from including questions about race or religion on its census but Muslims in France are believed to be 10% of the population.

According to Open Democracy:

“Areas with large Muslim populations saw big votes for the democratic socialist – Mélenchon won the Île-Saint-Denis area of Paris with 62%, where Macron came second with 14%. Some 51.5% backed Mélenchon in Marseille’s 15th arrondissement, which also has a large Muslim population, while one poll showed 69% of Muslim voters planned to back the Leftist, compared to just 14% who supported Macron.”

The Islamic Nyans Party, a Muslim political party in Sweden, fielded a candidate for a local position in 2020 in the Stockholm suburb of Rinkeby, a no-go zone known for its large Somali community. The organization also sought to have Muslims granted a “special minority status,” per Breitbart.

In 2019, the Muslim Council of Britain (MCB) published a list of 31 vulnerable seats in the general election that it believes Muslim voters had a “high” or “medium” chance of influencing.

“Fourteen of the 31 seats are held by Labour, 14 by the Conservatives and three by the SNP. The MCB, the main representative body for Muslims in the UK, is non-partisan,” noted The Guardian at the time.

Emgage’s report “demonstrates the impact of Muslim Americans’ efforts in recent years to flex their political muscle,” reports Politico. “Emgage’s political action committee, which bills itself as the largest Muslim American PAC in the nation, endorsed Biden in the 2020 general election and Sen. Bernie Sanders (I-Vt.) in the Democratic primary. Emgage also hosted a Democratic presidential primary forum that year.”

Ahead of the 2022 American midterms, Emgage has endorsed a number of candidates in addition to continuing its voter registration efforts. The organization has backed Democratic state Representative Summer Lee in Pennsylvania and Democratic Representative Andy Levin in Michigan. 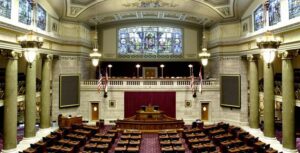