'He Ran Successfully As An Outsider In 2015 ... He Doesn’t Necessarily Need The GOP Establishment To Run For Office'

On Thursday, MSNBC contributor Sam Stein suggested Donald Trump may still have leverage over the Republican party despite former supporters seeking to distance themselves from the former President.

The Morning Joe panel discussed House Minority Leader Kevin McCarthy who appeared to dodge questions from reporters regarding his support for President Trump’s third bid for office in 2024. Host Joe Scarborough suggested the prospective Speaker of the House needed Trump’s approval to secure his win. Scarborough noted, however, McCarthy may be hesitant to express his support among a divided Republican party following last week’s midterm results.

“He ran successfully as an outsider in 2015, he was the president between then and now, so less of an ability to do so but he doesn’t necessarily need the GOP establishment to run for office,” Stein said of the former President, appearing to caution the former President’s critics. “He’s done it before without it.”

Stein noted Trump’s main cash base funding his campaign was online donations rather than “GOP megadonors,” who similarly appear to be distancing themselves from the former President, further suggesting the “pile on” of fellow Republican candidates could prove a challenge. McCarthy’s prospective speakership in the House could be derailed by the former President, Stein proposed.

“All Trump really has to do is come out and say we need to not elect this man speaker when the vote is held in public in early January. That’s a ton of leverage over McCarthy, especially because the House Republican majority will be so slim, so, you know, I know Trump’s in a weakened state but he’s been in a weakened state before,” Stein said. “Post Jan. 6th, we all thought it was the last chapter for him, and then McCarthy went down to Mar-a-Lago, so I’m not totally sure that this is it for Trump. I think he has a few more tricks up his sleeve.”

Former Trump administration Defense Secretary Mark Esper, who was infamously fired in a late 2020 tweet, said the former President was “unfit for office” and that “he puts himself before country” during a Wednesday appearance on CNN.

“To me, that’s shortcoming number one, and then I believe he has integrity and character issues as well,” Esper said. “I don’t think he’s an honest person. We saw the falsehoods that came out of his remarks last night … Americans need a leader they can trust.”

Trump’s Tuesday announcement at Mar-a-Lago, Florida was panned by critics as “low energy,” with some suggesting he was channeling former 2016 Republican Presidential candidate Jeb Bush.

“This was teleprompter Trump, never been the most powerful or effective spokesperson. This was Donald Trump channeling Jeb Bush,” CNN presidential historian Tim Naftali said. “Very low energy. Very, very unusual presentation from Donald Trump. It surprised me. It surprised me that given the amount of time he’s been thinking about this, this was the best product he could put out.”

“It doesn’t make sense until you remember that Trump’s chief rival is being pitched as ‘Trump without the downsides,'” Knowles continued, referring to prospective Republican primary frontrunner Ron DeSantis. “So Trump chose to present himself in those highly prepared remarks. … It was clearly strategic.” 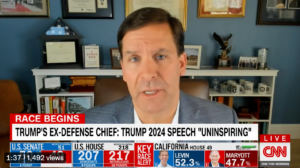