'He’s Done More To Help The Democrats Than The Republicans'

“He puts himself before country,” the former Defense Secretary said, adding, “To me, that’s shortcoming number one, and then I believe he has integrity and character issues as well.”

“I don’t think he’s an honest person. We saw the falsehoods that came out of his remarks last night … Americans need a leader they can trust,” Esper said.

Trump's Fmr. Defense Secy. Mark Esper shares why he think the former president is unfit to run again in 2024: pic.twitter.com/dOc7VEyzcL

“I thought his remarks were very subdued and uninspiring,” Esper said, commenting on the former President’s Tuesday speech.

“The election last week is an example that Donald Trump is incapable of winning elections,” Esper said, appearing to place blame on the former President for Republicans’ lackluster performance in last week’s midterm election. “He’s done more to help the Democrats than the Republicans.”

“I think that it’s time for the Republican Party, and frankly, both parties, to move on to a next generation of leaders, and particularly leaders that can unify our country and get us back to a more normal governance where we treat each other with dignity and respect, and we work on policy issues and not personal attacks,” Esper said.

Esper shifted focus to Florida Governor Ron DeSantis, who is speculated as a contender in the upcoming Republican primary, noting his success securing Hispanic voters.

“He did a great job in Florida. He brought more Hispanics on board. He appears to me to be the frontrunner,” Esper said.

“But I think we need to have a primary to see who emerges and who can really, again, rally Republicans, grow the base, and really reach to Independents out there across the country,” he said.

Trump infamously fired Esper in a late 2020 tweet following the November Presidential Election, appointing Christopher C. Miller as Acting Secretary of Defense throughout the remainder of his Presidency.

“I am pleased to announce that Christopher C. Miller, the highly respected Director of the National Counterterrorism Center (unanimously confirmed by the Senate), will be Acting Secretary of Defense, effective immediately,” said Trump. “Chris will do a GREAT job! Mark Esper has been terminated. I would like to thank him for his service.”

Former President Donald Trump announced his third bid for the White House in 2024 at Mar-a-Lago, Florida on Tuesday night. Aides for the former President filed paperwork with the United States Federal Elections Commission (FEC) shortly before his speech began.

“My fellow citizens, America’s comeback starts right now,” Trump said before detailing his discrepancy with President Biden’s administration over the last two years. “Two years ago, when I left office, the United States stood ready for its golden age. The world was at peace, America was prospering, and our country was on track for an amazing future — because I made big promises to the American people and, unlike other Presidents, I kept my promises.”

Trump added: “In order to make America great and glorious again, I tonight am announcing my candidacy for president of the United States.” 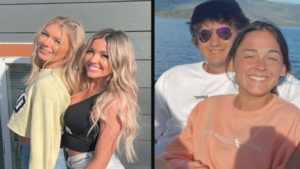