More than 70% of Americans Are in Favor of Abortion Restrictions, According to New Poll

The majority of Americans support legal restrictions on abortions, according to a new poll.

The Marist Poll, sponsored by the Knights of Columbus, found that most Americans want states to oversee their own abortions restrictions rather than have the legalities overseen by a central, federal government as stipulated in 1973 by  Roe V. Wade.

“When it comes to the direction of government policy, there has been consistency and consensus in American public opinion on the issue of abortion over the decades,” Dr. Barbara Carvalho, director of the Marist Poll, said in a press release on the results.

The poll found 54 percent of Americans oppose taxpayer funding being used for abortions. The same percentage of those polled said organizations with religious objections to abortions should not be required by law to provide insurance coverage for abortions.

Approximately 63 percent of Americans are opposed to the passage of new laws by the federal government that would mail abortion medication to women rather than requiring women to be prescribed the medication in person by a health care provider.

Of the 73 percent of Americans who said they “oppose” or “strongly oppose” using taxes to oppose abortion abroad, 59 percent self-identified as pro-choice.

Similarly, at least three-quarters of respondents said medical professionals — including doctors and nurses — who object to abortion for religious reasons should not be obligated to perform the procedure.

In a press release,  Knights of Columbus Supreme Knight Patrick Kelly said, “As we await a decision in the Supreme Court case Dobbs v. Jackson Women’s Health Organization, our polling continues to show that over 60% of Americans reject the central holding of Roe v. Wade, and want to return the decision to the states or make abortion illegal.”

The poll surveyed 1,004 adults across the nation via telephone between Jan. 4 and Jan. 9, 2022. Survey questions were available in both English and Spanish. 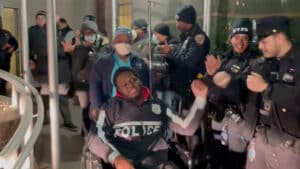 Two NYPD Officers Shot in the Line of Duty Within 36 Hours, Mayor Vows Crackdown on Crime

2 responses to “More than 70% of Americans Are in Favor of Abortion Restrictions, According to New Poll”