Milwaukee is the likely next location of the Republican National Convention, beating out Nashville.

While the decision is not yet final, the Site Selection Committee announced it had recommended the Wisconsin city for the 2024 convention following a vote on July 15.

“Today, the Site Selection Committee voted to recommend Milwaukee to host the 2024 Republican National Convention and it is a testament to the forthright and professional behavior embraced by Milwaukee’s city leaders throughout the process,” RNC senior adviser Richard Walters said in a statement, per Politico.

Wisconsin is regarded as a battleground state, giving additional weight to the RNC’s decision to hold its nomination convention in Milwaukee.

State business leaders and political figures celebrated the news over the weekend as an economic win for Wisconsin.

“Today’s news is great for our region, especially as workers and businesses continue to recover from the devastating economic impacts of the pandemic,” said Milwaukee County Executive David Crowley to the Milwaukee Journal Sentinel. “We are ready to show the world what Milwaukee has to offer.”

Peggy Williams-Smith, the chief executive and president of VISIT Milwaukee, has been a vocal advocate for the city as the convention’s next host.

“Milwaukee can 100 percent host this decision,” Williams-Smith told the newspaper on July 15. “Our job is to create an economic impact for the city. This will bring attendees from around the country and give us the economic boost we need.”

“Wisconsin is a battleground state, Milwaukee is a fabulous city, and the people of Wisconsin are the best in America,” said Reince Priebus, Milwaukee Host Committee Chairman, in a statement. “We will have a blast and it will be a great way to start our work together so that the Republican Party and our great country can begin the beautiful process of electing a President of the United States.”

“The farmers, manufacturers, and families of the Badger State truly represent the heart of America, and we’re now a big step closer to showcasing all that Wisconsin has to offer,” added Republican Party of Wisconsin Chairman Paul Farrow.

The event is expected to cost the RNC about $65 million and bring 50,000 people to Milwaukee, providing the state with a $200 million economic boost.

Nashville had been considered the other most likely location for the convention until the Metro Council withdrew a proposal on how the event could be hosted on July 12. Half of the council’s members opposed the measure.

Councilmember Robert Swope has vowed to reintroduce the proposal on Aug. 2 in hope that the RNC will still consider Nashville during its final vote.

“At this critical moment in history, we have the opportunity to demonstrate to the world that we are a city that does believe in civil discourse, that we admire and nurture each other, and believe it is these attributes that embody the fundamental American rights of freedom, which should be granted equally to all, no matter which party you favor,” Swope wrote in an opinion piece for The Tennessean. “I ask that my friends and fellow Metro Council members stand up and do the right thing for Nashville’s long-term future and prosperity and not take what will be perceived as a partisan shot across the bow of our state and federal elected leaders.”

Three dates in July and August of 2024 for the convention have been proposed.

Chairwoman Ronna McDaniel and the full RNC will vote on the Site Selection Committee’s recommendation and the proposed convention dates during the organization’s summer meeting on Aug. 2-5 in Chicago.

Milwaukee was set to host the Democratic National Convention in 2020 before the event was converted to a largely virtual format. President Joe Biden won Wisconsin by less than a 2% margin. The Democratic Party is still determining where its 2024 national convention will be held. Several major cities, including New York City, Atlanta, and Chicago have all been floated as possible locations. Democratic National Committee Chairman Jaime Harrison has given interested cities until October of 2022 to announce their interest in hosting the convention. 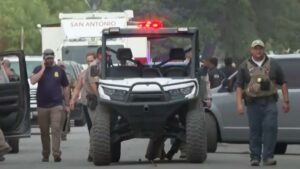