The military is threatening to revoke benefits from Marines who decline to get the vaccine.

According to internal emails obtained by the Washington Free Beacon, those who opt not to take the vaccine will lose their pensions, tuition assistance, and access to the G.I. bill, along with other military benefits.

In an email from Col. Teague Pastel, a commanding officer at the Marine Barracks in Washington, D.C., on August 18, he claimed that “vaccines are still voluntary,” but the military believes “they will become mandatory in the near future.”

Pastel said that the penalties “should be in line with others for insubordination,” the Free Beacon reports. He said that this can include “administration separation,” a demerit in the Marine’s personal file, and forfeiture of several retirement and financial benefits.

“Please continue engaging with our troops on the importance of vaccinating, and stress that it is still voluntary at this time. However, once the vaccine becomes mandatory they need to be prepared to separate and potentially lose benefits,” Pastel’s email reads. “If the Marines are not willing to lose the benefits then they should just get the vaccine now.”

“As you continue engaging with your Marines and Sailors about volunteering to get the vaccine now instead of waiting, please ensure they know the anticipated ramifications of refusing to vaccinate,” Pastel says in the memo.

The Free Beacon reports that the memo continued on to say that those who decline the vaccination will lose out on tuition assistance, “Post 9/11 G.I. Bill” benefits, as well as retirement contributions and credits.

“The Pentagon says more than one million troops are fully vaccinated, with another 237,000 receiving one dose. The percentage of those vaccinated by branch varies greatly, according to the military’s latest numbers. The Department of the Navy, of which the Marines are a part, says 74 percent of its members have received at least one dose of the vaccine,” the report states.

The military has had 34 total deaths from COVID-19, according to reports.

The Pentagon announced the vaccine mandate on Monday.

“These efforts ensure the safety of our service members and promote the readiness of our force, not to mention the health and safety of the communities around the country in which we live,” he said.

Kirby said that deadlines for our military to take the jab will be provided in the coming days. 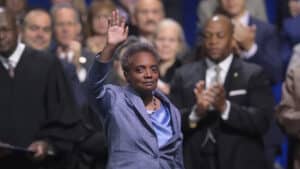