At least seven people were killed and 44 wounded in a series of shootings across Chicago over the weekend, raising even more questions over safety and security in the nation’s third largest metropolis.

“The shooting victims ranged in age from 14 to 68 years old. At least four of the shootings involved multiple victims,” reports Fox News.

“According to CPD, the 14-year-old boy was standing outside in the Little Village neighborhood around 1:35 a.m. when he was ‘punched and kicked by a group of people before being stabbed twice in the shoulder. He was rushed to an area hospital in serious condition and was later determined to have also been shot in the arm,” adds Fox.

At least seven people were killed and 36 others were wounded in weekend gun violence in Chicago that included two mass shootings. https://t.co/WisKyFi2xh

The series of shootings is the latest to cause chaos in the Windy City, including a routine traffic stop that left one officer dead and another in critical condition.

The Chicago Sun Times reports that “Lightfoot tried to talk to the male officer’s father, who himself is a retired Chicago police officer. He clearly wanted nothing to do with Lightfoot, according to two sources who were there.”

“The father excoriated the mayor and blamed her for what had happened. One source said Lightfoot handled herself well as the father yelled at her. She listened and treated him with respect,” the report continues. “It was then suggested that Lightfoot say a few words to nearby grieving officers, but as she approached, they all walked away from her and to the other side of a bank of chairs — and turned their backs, the sources said.” 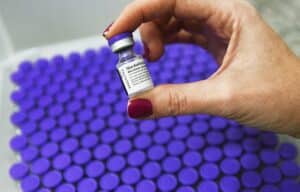