An estimated 2,000 migrants are now camping on a baseball field near Tapachula

A caravan of Central American migrants overwhelmed Mexican authorities in Tapachula on the nation’s southern border.

The migrants are traveling to the Southern Border of the United States, over 1,000 miles North. After pushing past a line of authorities, the estimated 2,000 migrants set up a temporary camp on a nearby baseball field.

Fox News reports that the organizer of the caravan said some of the migrants are “carrying American flags and signs with President Biden’s name.”

“The caravan is not merely a group of migrants congregating together, organizers made migrants who wished to participate in the caravan to register with a QR code on their phones or a web link to participate,” per Fox News.

In a video posted to Twitter, caravan organizer Irineo Mujica said the Biden Administration was “hauling” the migrants “like cattle.”

The migrants had reportedly been waiting in Guatemala for months before growing frustrated over the weekend and pushing into neighboring Mexico. On Saturday, a few minor clashes took place which left some small children injured.

“Mexico requires migrants seeking humanitarian visas or asylum to wait in the border state of Chiapas while their cases are being processed,” reports The New York Post.

The news of the migrant caravan coincided with reports that 5,000 U.S. border patrol agents may be fired for not complying with President Joe Biden’s vaccine mandate. The agency has said that officers who do not have an approved religious or medical exemption may be terminated at the end of November.

“Think of how many people, like on the border, Border Patrol. How many of these Border Patrol agents are going to separate? I’ve been told it could be as many as 5,000,” said Arizona Rep. Andy Biggs per One America News. “And if that many were to leave, as porous as our border already is, you’d truly have a national security crisis along your border.”

This is the highest level ever recorded.#BidensBorderCrisis

U.S. Customs and Border Protection officials report they have detained a record high 1.7 million illegal immigrants over the previous 12 months. 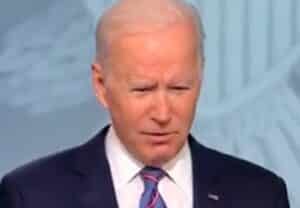