Michigan Senator Debbie Stabenow announced she will not seek reelection in 2024.

Her impending vacancy has already further intensified a race already predicted to be competitive.

The Democrat was the first woman from her state to be elected to the United State Senate when she took office in 2000. Stabenow announced on Jan. 5 that this will be her final term in office.

“Inspired by a new generation of leaders, I have decided to pass the torch in the U.S. Senate. I am announcing today that I will not seek re-election and will leave the U.S. Senate at the end of my term on January 3, 2025,” she said in a statement.

The senator reflected on her time in office, during which she focused on agricultural, manufacturing, and environmental issues.

“I am ‘Made in Michigan.’ My work is deeply rooted in my love of our wonderful state,” she said. “Whether protecting our Great Lakes, transforming mental health services, or ensuring our state can continue to make things and grow things to be competitive in our world economy, I am proud that my accomplishments have made a difference in people’s lives and created a strong foundation for a healthy and prosperous future for our state.”

Stabenow said during her final years in office she intends to focus on “continuing this important work to improve the lives of Michiganders.”

“This includes leading the passage of the next five-year Farm Bill which determines our nation’s food and agriculture policies. It is also key in protecting our land and water and creating jobs in our rural and urban communities,” said Stabenow.

Stabenow advocated intensely for federal aid for people in Flint after the city was plagued by toxic levels of lead.

“There’s no reason that our Flint package that we passed could not be in that so that people don’t have to wait until the end of the year in Flint,” said Stabenow in 2016 while sparring with Senator Mitch McConnel over a critical budget bill. “Every day counts… So for me, this is about whether or not we’re able to act now.”

“When my term ends, I intend to begin a new chapter in my life that includes continuing to serve our State outside of elected office while spending precious time with my amazing 96-year-old mom and my wonderful family,” Stabenow said.

Michigan is regarded as a swing state. Stabenow’s decision to leave office may benefit potential Republican candidates as the party has been narrowly defeated in the Michigan Senate races in recent years.

“Senate Democrats don’t even have a campaign chair yet and they are already dealing with a major retirement. We are going to aggressively target this seat in 2024,” Mike Berg, a spokesman for the National Republican Senatorial Committee, said in a statement to the press. “This could be the first of many Senate Democrats who decide to retire rather than lose.” 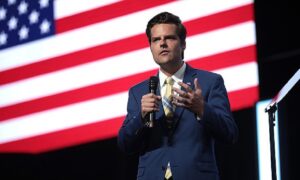