Republican Leader Kevin McCarthy and Florida representative Byron Donalds were nominated for speakership during the 118th Congress’ seventh ballot for Speaker of the House. Gaetz, who has been the most vocal opponent of the Republican Leader, voted for the former President defecting from his initial support of Ohio representative Jim Jordan and subsequently Donalds.

It is unclear if Gaetz sincerely supports the former President for Speaker or if his vote was in protest to McCarthy.

The vote is still underway, though McCarthy has lost his 5 vote threshold as of this article.

On Wednesday Missouri representative Cori Bush criticized Donalds by suggesting he was a “prop” and claimed he was “upholding white supremacy.”

“FWIW, [Byron Donalds] is not a historic candidate for Speaker. He is a prop,” Bush said. “Despite being Black, he supports a policy agenda intent on upholding and perpetuating white supremacy. His name being in the mix is not progress—it’s pathetic.”

Donalds responded to the Missouri representative shortly after referring to her as a “crab in a barrel.”

“FWIW, nobody asked [Cori Bush] her opinion on the matter,” Donalds fired back. “Before you judge my agenda, let’s have a debate over the policies and the outcomes. Until then, don’t be a crab in a barrel!”

On Wednesday, Gaetz claimed McCarthy sent a text to a fellow Republican critic suggesting the Republican Leader was “losing it.”

“McCarthy is losing it,” Gaetz wrote. “He texted one of my colleagues who didn’t vote for him: ‘I am ready to fund an endless war.’”

“I’m assuming this is in *addition* to Ukraine.”

An eighth vote is presumably scheduled following the tabulation of the current ballot. 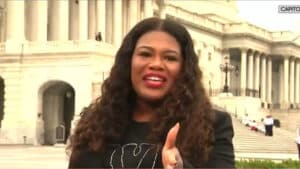