Prosecutors allege a pattern of bribery, espionage, and threats spanning more than a decade

The U.S. Department of Justice (DOJ) has arrested multiple Chinese nationals, alleging criminal activity that spawned more than a decade.

A federal complaint was unsealed Oct. 24 charging two intelligence officers with the People’s Republic of China (PRC) with attempting to obstruct a criminal investigation into the PRC-based company Huawei.

Federal prosecutors argue that, in 2019, the pair recruited a U.S. government employee to steal confidential information to provide to the PRC. However, the individual they recruited was actually a double agent working on behalf of the FBI.

“As the complaint alleges, the defendants paid a bribe to the double agent to obtain non-public information, including files from the US Attorney’s Office in the Eastern District [of New York],” U.S. Attorney General Merrick Garland told reporters during a press conference about the arrests.

The double agent gave the Chinese intelligence officers documents that appeared legitimate, but were actually prepared by federal officials. At no time during the investigation was sensitive information provided to the PRC.

“This was an egregious attempt by PRC intelligence officers to shield a PRC-based company from accountability and to undermine the integrity of our judicial system,” Garland said in prepared remarks.

Monaco told reporters that agents attempted to bribe and obstruct the criminal prosecution of “a global telecommunications company” headquartered in China.

“This case exposes the interconnection between PRC intelligence officers and Chinese companies, and it demonstrates once again why such companies, especially in the telecommunications industry, shouldn’t be trusted to securely handle our sensitive personal data and communications,” Monaco said.

Federal officials also say between 2008 and 2018, the group used the cover of a Chinese Academic Institute (possibly the Confucius Institute) to co-opt Americans, using them to acquire technology and equipment to send to China. Prosecutors also say the Chinese government sought to quell protests in the U.S. that would have been embarrassing for the Chinese government.

Garland said the PRC has a history of targeting political dissidents in other countries. He said the Chinese spies in federal custody ran harassment campaigns, surveilled, and intimidated victims, hoping to coerce them to return to China. They also threatened and harassed the dissidents’ family members, both in the U.S. and in China, according to the complaint.

One victim says the PRC forced his nephew to travel from China to the U.S. to relay the PRC’s threats face-to-face. PRC officials also filed frivolous lawsuits against the victim and his son, promising “endless misery” for him to defend himself. 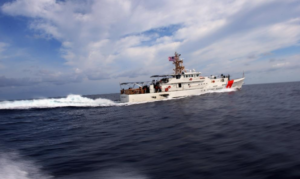