The Canadian man who was arrested for attacking House Speaker Nancy Pelosi’s husband in their home has pleaded not guilty to six charges brought by the state of California.

David DePape, 42, has been accused of hitting Paul Pelosi, 82, in the head with a hammer inside the Pelosis’ San Francisco home in October. DePape has been charged with attempted murder, first-degree residential burglary, elder abuse, assault with a deadly weapon, false imprisonment, and threatening the family member of a public official.

During a court appearance on Dec. 28, DePape pleaded not guilty to the state’s charges and waived his right to a speedy trial. He previously pleaded not guilty to two federal criminal charges in November – attempted kidnapping and assault with intent to retaliate against a federal official by threatening or injuring a family member.

Pelosi sustained a number of serious injuries as a result of the attack. He underwent surgery for a skull fracture and was released from the hospital in early November.

Prosecutors indicated in court filings that they believe DePape was on a  “suicide mission” and had other victims in mind. The government says DePape told law enforcement he said to Pelosi he was “sick of the insane f—— level of lies coming out of Washington, D.C.” and that he “came here to have a little chat with his wife.”

“I didn’t really want to hurt him, but you know this was a suicide mission. I’m not going to stand here and do nothing even if it cost me my life,” said DePape according to court documents.

Nebosvod “Sky” Gonzalez, DePape’s 19-year-old son, told the Daily Mail on Dec. 13 that his father has suffered from a traumatic life but is not a “danger to society.”

“I don’t even know if he even attacked Mr. Pelosi. For all that we know he was some sort of sex slave, as Elon Musk pointed out,” said Gonzalez. “I’m surprised about the whole thing. There is still a lot of info that hasn’t been given to the public. … Do we even know what really happened?”

He also told the outlet that his father was a member of the Green Party.

“My father had a lot of political views and told me about a lot of different things, but he didn’t subscribe to either political party, Democrat or Republican,” Gonzalez said. “My father had progressive views. He believed in human rights, equality, and justice. He was against the war, he was a peace activist, hardly a right-wing conservative, as he has been branded.”

DePape will next appear in court on Feb. 23 at which time a date for a trial by jury will be set. If convicted of the state charges, he could be sentenced to 13 years in prison. The Justice Department has indicated that the federal charges are punishable with up to 50 years in prison. 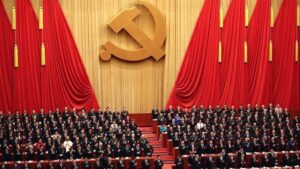 Why Are CCP Leaders Reportedly Dying in Droves From COVID-19?