The Food and Drug Administration is expected to make a formal recommendations in the coming days.

An advisory panel for the Food and Drug Administration endorsed Pfizer’s COVID-19 vaccine for children aged 5 to 11.

In a unanimous vote, with one abstention, the panel ruled that the benefits of the vaccine outweigh any of the consequences.

Although children are less likely to contract severe cases of COVID-19, the panel ruled that it was better to give parents an option to vaccinate their children as some could be at higher risk or live in places where mask-wearing is not enforced.

One panel member, Dr. Amanda Cohn of the Centers for Disease Control and Prevention, said, “This is an age group that deserves and should have the same opportunity to be vaccinated as every other age.”

Dr. James Hildreth of Meharry Medical College, another member of the panel. said he voted for the vaccine “to make sure that the children who really need this vaccine — primarily Black and brown children in our country — get it.”

The decision comes just weeks after several European countries halted the use of the Moderna vaccination for people born in 1991 and later. Health agencies in Finland, Denmark, and Sweden all found the demographic category reported higher rates of inflammation of the heart muscle and inflammation of the lining around the heart.

“Full-strength shots made by Pfizer and its partner BioNTech already are recommended for everyone 12 and older but pediatricians and many parents are clamoring for protection for younger children,” reports AP News. “The extra-contagious delta variant has caused an alarming rise in pediatric infections — and families are frustrated with school quarantines and having to say no to sleepovers and other rites of childhood to keep the virus at bay.”

There have been over 8,300 hospitalizations reported among the 5- to 11-year-old age group and approximately 100 deaths. About 25,000 pediatricians and other primary care providers registered to offer these vaccinations so far, which are demarcated with an orange cap.

California Governor Gavin Newsom already announced he would mandate vaccines for school-aged children and the FDA approves them. First older teens, then those over the age of 12, and finally kindergarteners. The mandate would apply to both private and public schools.

“We have no trepidation, no hesitancy in encouraging local districts to move forward more expeditiously. … we expect, on the basis of other similar requirements, that you’ll start to see an uptick in people getting vaccinated well before those dates that are established,” he said in his announcement.

The panel’s opinion does not make the decision final. The FDA will make its own recommendation in the coming days and if the two groups express the same opinion, the Center for Disease Control and Prevention would then decide if and when children in the age bracket would be permitted to get the vaccine. 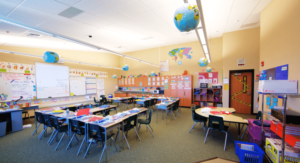 70% of Virginia Dems Want Parents to Have LESS Say in Education, Independents and Republicans Disagree