Wyoming Congresswoman Liz Cheney has said her future as a Republican depends on the party’s next presidential nomination.

“I certainly will do whatever it takes to make sure Donald Trump isn’t anywhere close to the Oval Office,” she added.

Cheney was one of ten Republicans who voted to impeach President Donald Trump in January of 2021 for allegedly encouraging a mob to invade the Capitol on Jan. 6 during the certification of the results of the 2020 general election.

Cheney, the daughter of former Vice President Dick Cheney, was formally removed from the House Republican leadership in May of 2021. At the time, she was the third highest-ranking party member in the House.

Cheney was later appointed the vice chair of the House select committee investigating the events of Jan. 6.

Massachusetts Congressman Bennie Thompson, the committee’s chairman, said Cheney  “demonstrated again and again her commitment to getting answers about January 6th, ensuring accountability, and doing whatever it takes to protect democracy for the American people.”

“Her leadership and insights have shaped the early work of the Select Committee and this appointment underscores the bipartisan nature of this effort,” said Thompson, per Fox News.

Cheney and Illinois Congressman Adam Kinzinger are the only two Republicans on the committee.

“We owe it to the American people to investigate everything that led up to, and transpired on, January 6th,” Cheney said. “We will not be deterred by threats or attempted obstruction and we will not rest until our task is complete.”

Cheney will not seek reelection after losing her August primary. Trump-endorsed attorney Harriet Hageman readily defeated Cheney after securing just over 66% of the vote.

In her concession speech, the congresswoman highlighted that she has won the primary in 2020 with 73% of the vote. She attributed her loss to her unwillingness to “go along with President Trump’s lie about the 2020 election.”

She said she would not “enable his ongoing efforts to unravel our democratic system and attack the foundations of our republic,” per CNBC.

“Liz Cheney should be ashamed of herself, the way she acted, and her spiteful, sanctimonious words and actions towards others,” Trump wrote in a post on Truth Social after the primary. “Now she can finally disappear into the depths of political oblivion where, I am sure, she will be much happier than she is right now.”

Trump called the race a “referendum on the never ending Witch Hunt” and declared, “The people have spoken!”

During her appearance at the Texas Tribune Festival, Cheney also said she would do everything she can to make sure Kari Lake does not win the Arizona gubernatorial election.

Cheney said the Republican Party “cannot see an accommodation” for “an election denier, who is dangerous.”

She told Smith that “partisanship has to have a limit” and that she would be willing to campaign for Democrats who were running against Republicans she did not support — specifically those who have suggested the results of the 2020 election were inaccurate. 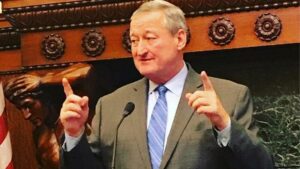