Executives from LiveNation were confronted by lawmakers during a Senate Judiciary Committee aimed at determining the company’s role in a potential monopoly on live events.

The chaotic sale of tickets to pop singer Taylor Swift’s Eras Tour in November prompted public outrage over the company’s conduct. Ticketmaster significantly underestimated how many tickets it would sell during pre-sale, which caused its website to crash after 14 million people logged on to buy tickets. Sales were delayed for hours and the company ultimately canceled its public sale of tickets. More than two million tickets were sold in one day.

“The recent on-sale experience with Taylor Swift, one of the world’s most popular artists, has highlighted the need to address [ticket scalping] issues urgently,” Joe Berchtold, the president and CFO of LiveNation, told the committee. “We were hit with three times the amount of bot traffic than we’ve ever experienced… This is what led to a terrible consumer experience, which we deeply regret.”

The explanation was similar to that offered by Live Nations’s CEO Greg Maffei in November while speaking with CNBC.

“Reality is it’s a function of the massive demand that Taylor Swift has,” Maffei said. “We had 14 million people hit the site – including bots, another story, which are not supposed to be there.”

Jerry Mickelson, the co-founder of Jam Productions, challenged the executive’s bot explanation during his testimony.

“For the leading ticket company not to be able to handle bots is, for me, an unbelievable statement,” Mickelson said, per CNBC. “You can’t blame bots for what happened to Taylor Swift. There’s more to that story that you’re not hearing.”

The chaotic conclusion of the highly anticipated sale prompted calls for an anti-trust investigation. Critics of LiveNation say it controls too much of the live entertainment industry.

Amid the sales issues, Minnesota Senator Amy Klobuchar sent a letter to Ticketmaster requesting its CEO Michael Rapino explain if the company was in violation of an antitrust consent decree it was obligated to sign before its merger with LiveNation in 2010. The decree was created to ensure the merger did not hurt competition and was renewed in 2020. It is set to expire in 2025.

Klobuchar and Connecticut Senator Richard Blumenthal called for the Department of Justice to probe LiveNation and Ticketmaster’s operation in 2019 for potentially violating the agreement. The DOJ opened an investigation into LiveNation prior to the Taylor Swift tour ticket sales upset.

“LiveNation is so powerful that it doesn’t even need to exert pressure, it doesn’t need to threaten, because people just fall in line,” Klobuchar said during her remarks on Jan. 25. The senator leads the Senate Committee’s antitrust investigations.

“Restoring competition to our markets is about making sure that fans get fair prices and better service,” she said, per Axios.

“The fact of the matter is, Live Nation/Ticketmaster is the 800-pound gorilla here,” said Blumenthal. “This whole concert ticket system is a mess, a monopolistic mess.”

Throughout the hearing, lawmakers on the committee quoted lyrics from Swift’s songs.

“Ticketmaster should look in the mirror and say, ‘I’m the problem, it’s me,’” said Blumenthal.

“I have to throw out, in deference to my daughter Eliza, one more Taylor Swift quote,” said Utah Senator Mike Lee at one point. “‘Karma is a relaxing thought, aren’t you envious for you it’s not?’”

Lee also referred to Swift’s hit songs “Blank Space” and “You Belong With Me” during the hearing. 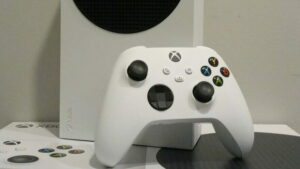