Karen Bass intends to house 17,000 people during her first year in office

Los Angeles Mayor Karen Bass declared a state of emergency on homelessness during her first day in office.

Bass said her declaration will “recognize the severity of our crisis and break new ground to maximize our ability to urgently move people inside, and do so for good” during her inaugural address.

“It will create the structure necessary for us to have a true, unified and citywide strategy to set us on the path to solve homelessness,” Bass said. “We know our mission: We must build housing in every neighborhood. … We cannot continue to overcrowd neighborhoods that are already overcrowded.”

Harris administered the oath of office during a ceremony at the Microsoft Theater on Dec. 11. Stevie Wonder, Chloe Bailey and Los Cafeteras performed at the event.

According to NBC Los Angeles, homelessness in the city increased by 1.7% since 2020. Data from the Los Angeles Homeless Services Authority indicates the homeless population is 41,900 – slightly greater than the population of Culver City, CA.

Bass has set the goal of housing 17,000 people during her first year in office.

Former Mayor Eric Garcetti had vowed to end homelessness while running for office in 2013. At the time, there were 22,993 homeless people in the city. Once elected, he vowed to reduce street homelessness by 50% by 2023. Instead, Los Angeles’ homeless population nearly doubled.

Garcetti said on Dec. 9 that “he did not believe that he declared he would eradicate homelessness outright, but that it should be the city’s goal to end chronic homelessness,” per the Los Angeles Daily News. The outgoing mayor noted that under his leadership the city’s homelessness budget has increased dramatically, rising from $10 million to $1 billion in one year.

Garcetti had declared a state of emergency due to the homelessness crisis in 2015.

Los Angeles is not the only major city on the West Coast struggling with an increasing homeless population.

Portland Mayor Ted Wheeler declared a state of emergency due to homelessness in February.

“We deal with mental health issues. We deal with substance abuse issues. We deal with human feces,” Wheeler told the city council in the fall. “We deal with naked people running down the street, people who are unable to even acknowledge who or where they are, because their afflictions are that serious. It is beneath us as a moral and ethical society to have that happening in our community.”

Wheeler has expressed concerns about dangerous weather and roadways which could have fatal consequences for people living in homeless encampments. 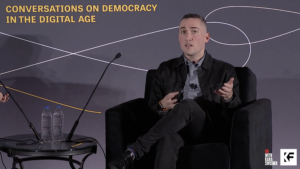