Migrant Buses Were Escorted to the U.S. Southern Border By Mexican Police

More than 1,000 migrants illegally crossed into El Paso, Texas during the night of Dec. 11, setting a record for the highest number of illegal aliens encountered in a single group in the U.S.

A dashboard for the city of El Paso shows the Border Patrol agents have more than 2,400 daily migrant encounters and currently more than 5,600 are in custody. Hundreds have been released from holding facilities, which are over capacity.

“Customs and Border Protection’s El Paso Sector on the Texas border with Mexico has seen an increase in encounters,” CBP said in a statement to Fox News on Dec. 12. “In order to process individuals as safely and expeditiously as possible, Border Patrol agents from Big Bend and CBP Officers from El Paso Field Office are assisting with processing.”

Mexican police assisted the illegal border crossing by escorting nearly 20 buses full of migrants to the Mexican city of Juarez, just across from El Paso. Authorities released the migrants to non-governmental organizations (NGOs), then the migrants walked from the NGOs and crossed into El Paso.

The group — which was comprised of individuals from Cuba, Nicaragua, and Venezuela — was kidnapped while on a bus during the journey to the U.S. Men in police uniforms reportedly stopped their bus, then redirected them to a house where they were held hostage, according to the New York Post.

“We were 1,500 people sleeping in a house,” a 29-year-old Peruvian woman named Carmen said. “They took everything, my passport, my phone. My legs are covered with bruises from other people kicking while we slept.”

The migrants were kidnapped by an organized crime syndicate in Durango. The Mexican military rescued them after six days, and authorities escorted the caravan to the U.S. border for their protection, the El Paso Times reported.

The city’s Migrant Welcome Center can accommodate 400 migrants per day. According to El Paso’s dashboard, more than 13,000 migrants have been received from Border Patrol officials. El Paso data shows the cost skyrocketing from $157,821 in the first quarter of this year to more than $4.1 million for the fourth quarter.

Local authorities are releasing 805 illegal aliens into the El Paso Community each day, with another 498 daily street releases. Nearly 14,000 have been transported from El Paso to other locations year-to-date. 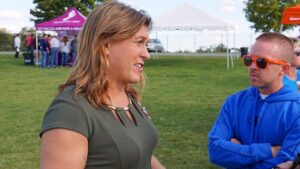